How To Limit Who Can Reply To Your Tweets On Twitter 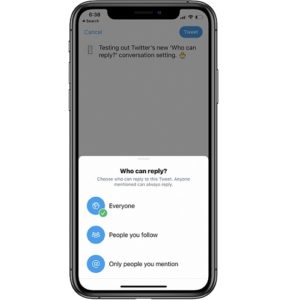 Do you know that you can limit the users that can reply to your tweets?
This new Twitter conversation option has been added recently and can be applied to each new tweet that you post.
You can choose who can comment to your Tweet both on the web interface, as well as on mobile apps like iOS and Android.

There are three limitation options. You can either go with the default setting and allow everyone to comment.
A more restrictive option allows only replies from accounts that you follow. The third and most limited setting accepts replies only from people mentioned in your tweet.
If you don’t mention anyone, the reply button will be grayed out for everyone.

How To Limit Who Can Reply To Tweets 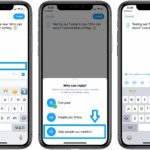 1. Open Twitter on your iPhone, Mac or any other computer or smartphone.
2. Tap on the ‘new tweet’ icon and write your tweet.
3. Notice the default ‘Everyone can reply’ setting, accompanied by a globe icon. Tap / click it if you want to change this permission.
4. Choose one of the available options: Everyone, People you follow, Only people you mention.
5. Tap on Tweet to publish your post.

Fact: Be aware that if you limit those that can reply to your tweet, the setting will be made public and the post will be labeled. The reply button will be grayed out for those that don’t qualify. More, there is no option to change the initial setting after publishing.

– The above mentioned restrictions are only affecting the ability of other accounts to reply to comment to your tweet. However everyone else can still view, like, retweet or retweet with comment.
– As mentioned above, there is no way to edit a tweet’s comment limitation. Your only solution is to delete the tweet and re-post it with updated permissions. However, this will erase all views, likes and comments that have been already generated.
– Replies and retweets of a ‘limited’ tweet will inherit the restrictions that you set for the root post.
Fact: If a root tweet is deleted, the replies and retweets will lose any previous restrictions.
– Retweets with Comments are the only ones that don’t inherit the restrictions of a root tweet.
– Deactivating an account will result in lifting of all restrictions that are applied to your tweets. Reactivating it, during the reactivation window, brings the original restrictions back.

Twitter has started to gradually roll out this feature since May 20. If you can’t find the ‘Everyone can reply’ option in the new tweet screen, it means that the feature isn’t active yet in your region.
Make sure that you run the latest version of Twitter for iOS or Android.

Are you able to limit who can comment to your tweets? Let us know using the comments section available below.