How To Pair Apple Watch With Wireless Headphones 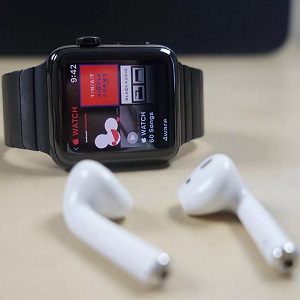 The Apple Watch is becoming slowly but surely and independent smart device. It’s able to perform calls, send messages and play music without the help of the paired iPhone. Nevertheless, because of size and hardware limitations its not possible yet to stream music from your wrist via the built-in speaker. In order to avoid using the iPhone and remain autonomous, you need to connect your watchOS device to headphones whenever you want to play a song.

Because the Watch doesn’t feature a lightning port, you will need to use a wireless headset. Remember, that the Apple Watch is charged via a special magnetic charging cable, that connects to the back of the device, without needing a plug-in port. This means that Bluetooth technology has to be used for connecting the Apple Watch to an external audio output.

Apple Watch Compatible Headphones
Before purchasing or attempting to pair, be aware that the AW is guaranteed to connect with Bluetooth 4.0 or higher, supported devices. It’s also matching with Apple’s the W-series chip that is used by the AirPods and Beats headphones.
Fact: It’s highly likely that Bluetooth 3.0 or older headphones won’t show up on the pairing screen!

How To Connect Apple Watch With Wireless Headphones 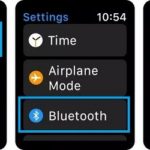 Once you are sure that you own a compatible headset follow the steps described here to start listening to music streamed from the Apple Watch:
1. Bring your headphones in pairing mode. This is usually done with a button press that makes your headphones available for pairing.
2. Raise your wrist and press the Digital Crown to open the Apple Watch Home screen.
3. Tap on Settings.
4. Select Bluetooth and allow your watchOS device to scan for available headphones.
5. Tap the name of the headset, once its recognized, to connect. A successful pairing is confirmed by the “paired” status.

Tip: Now you can start playing tracks from Apple Music or any other third-party music app like Spotify. If you run watchOS 5 or later, simply Raise to Speak and ask Siri to play your favorite song.