How To Pay For Fuel With Your Apple Watch 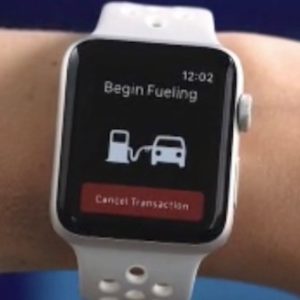 Exxon Mobil Corporation has just started to allow its customers, that own an Apple Watch, to pay via Apple Pay, directly from their wrist, at each of their 10,000 gas stations available in the United States. The popular American oil and gas corporation has just upgraded its Speedpass+ app for iOS, with support for the Apple’s popular watchOS device. This move comes a little more than an year after Exxon and Mobile integrated Apple Pay compatibility to the iPhone app, allowing customers to perform mobile payments.

Apple Watch owners can now open the Speedpass+ app on their wrist gadget, select the pump, authorize it for payment and double-tap the smartwatch’s Side button to invoke Apple Pay. As soon as the payment is confirmed, fueling up or car washing can begin. Speedpass+, version 4.5, also includes Touch ID authorization feature to make logins quicker, as well as fuel payments directly from your car, for Ford SYNC®3 equipped vehicles.

How To Use Speedpass+ On Apple Watch

1. Download/Update SpeedPass+ 4.5 or later on your iPhone. Wait until the app is automatically deployed on the paired Apple Watch.
Tip: If the Automatically Download Apps feature isn’t active, you have to manually install the software from the Apple Watch app available on your iPhone.
2. Raise your wrist, to wake the watchOS device, press the Digital Crown to open the app bundle and locate the Speedpass+ icon. Tap it!
3. Tap on Pay for Fuel and select the pump number.
4. Tap on Authorize Pump to confirm that you want to refuel.
5. Double-tap the Apple Watch Side button to bring up Apple Pay. Authorize payment and start fueling up.

Fact: Unexpectedly, Speedpass+ doesn’t use NFC (Near Field Communication) technology to validate Apple Pay payments from your iPhone or Apple Watch. It focuses on GPS data and QR codes instead.

Info: Chevron was the first fuel company to provide Apple Pay support for its San Francisco-located customers back in 2015. Jaguar has partnered with Shell, in the United Kingdom, to include Apple Pay compatibility within the car’s computer system, the same way Ford SYNC®3 equipped automobiles do.