iOS 10.0.3 Fixes Cellular Connectivity Bug For iPhone 7 and 7 Plus Devices 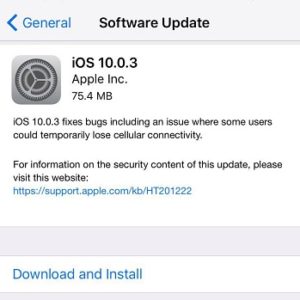 Apple released yet another software update that is aimed to patch a cellular connectivity bug signaled among iPhone 7 and iPhone 7 Plus owners. The issue caused poor phone call quality especially for Verizon and T-Mobile customers. The issue affects bot call and data performance! An important side note is that iOS 10.0.3 has been seeded only for Apple’s latest flagships. Meaning that if you own an iPhone 6 series or older, you’ll get the “Your software is up to date” message when attempting to search for the update, over-the-air.

iOS 10.0.3 is the second increment since the public release of iOS 10, a little over one month ago. iOS 10.0.2 solved the headphone audio controls issue and the occasional crashing of the Photos app. iOS 10.1, the next significant increment, isn’t too far away. Beta 4 has been rolled out today and it seem that we’re only days away until its public availability. It will officially bring Portrait Mode to iPhone 7 Plus owners.

Download & Install iOS 10.0.3
If you’re an iPhone 7 or iPhone 7 Plus owner open Settings and browse for General -> Software Update. After your device find the new firmware, tap on Download and Install to start the OTA upgrade process. Make sure that your iPhone battery levels are over 50%. Sit back and relax until the 75.7 MB update is downloaded and deployed on your smartphone. The device automatically reboots, as it does after all software upgrades. You should be ready to use your iPhone normally in a couple of minutes.

iOS 10.0.3 Update Log
According to Apple’s release note this update promises to fix “bugs including an issue where some users could temporarily loose cellular connectivity”.
Although the word “bugs” is used in the above mentioned note, no other patches have been highlighted to us, excepting the one mentioned above. We will update them here if detected after this article was published.
If you want to check out the security content of this version you can check it on the official Apple.com page available here.