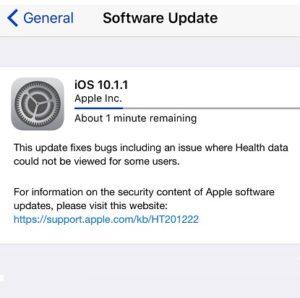 Exactly one week after the release of iOS 10.1, that came with Portrait Camera Mode, iMessage effect Replay and a series of other changes and fixes, Apple seeds yet another update labeled iOS 10.1.1 to mend some more bugs. Among them was the glitch that prevented Health Data from properly displaying for some iPhone users. All this comes 6 weeks after the major roll out of iOS 10 that brings a whole bunch of new features and functionality to your iPhone and iPad.

Along with seeding iOS 10.1.1 Apple has also stopped signing the previous updates 10.0.2 and 10.0.3 (iPhone 7 & 7 Plus only), which means that users aren’t able to downgrade to these older versions anymore. If you’re running one of them because of some particular reason, think twice before updating. Else, go ahead and open Settings from your iPhone’s Home Screen, browse for General and tap on Software Update! 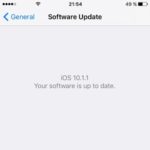 Install iOS 10.1.1 On iPhone
Tap Download and Install and allow your device to perform the OTA update. It should unfold fast because the size of the update is not larger than 200 MB, if you already run an iOS 10 version on your device. The only difference is in the case of those of you that still run a Beta version on your devices. In this case your iPhone will have to download the full firmware instead and not just the small delta update. Expect to download a package of around 1.6 – 2 GB, in case you fit the second category. 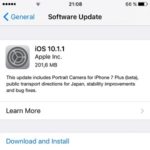 According to the release note available on the Software Update page this update “fixes bugs including an issue where Health data could not be viewed for some users.”
There have also been reports, and we’ve experience it too in our office, of some erroneous update logs that announce iOS 10.1.1, but come with the updated of the previous release, the iOS 10.1. This happens only to some iPhone owners and there is no know explanation for now.
We’ve hard restarted the device, only to get the same Software Update screen. Ultimately we took the risks and hit the Download and Install button. Everything turned out to be fine. Check the nearby print-screens to convince yourself.