iOS 10.1 [App Name] Might Slow Down Your iPhone Warning Explanation 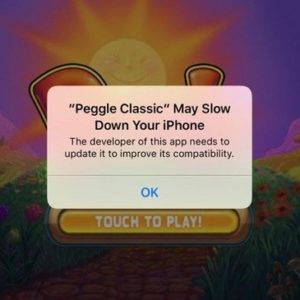 [iOS app name] may slow down your iPhone warning.

iOS 10.1 reintroduces the 32-bit warning for apps that haven’t been updated to comply with the iOS 10 requirements. Apple has asked developers ever since 2013 to update available apps to be 64-bit compatible and also encouraged coders to focus on creating new App Store applications that are optimized for 64-bit hardware. The iPhone 5S was the first Apple device to come with 64-bit hardware support thanks to the A7 processor, while iOS 7 was the first version of the popular mobile operating system that ran on 64 bits.

Since February 2015 The Cupertino-based tech giant has imposed App Store developers to include 64-bit version for their apps and a few months later the requirement had to be met also by all app updates released after June 1. Apple doesn’t sell any 32-bit iPhones or iPads since June 2015 at it seems that starting with iOS 10 app developers which have failed to upgrade their software will experience a massive loss in users because of the warning screen to be introduced by iOS 10.1.

According to various benchmarks, apps coded for the 64-bit system run around 30% faster than those on 32-bit. This means that your iPhone can run at its maximum potential. So, if your iOS device displays a similar warning to the one from the print screen uploaded nearby you’ll now what it means. The game that you’re playing or that you’ve recently downloaded runs on 32-bit system and hasn’t been updated since mid 2015. This will most likely to stop playing it and search for a newer app.

Fact: Here is what this new iOS 10.1 warning states, word by word:

Tip: Don’t delete the game right away. It’s likely that many developers will be forced by the warning to rapidly upgrade their apps and you might receive and App Store Update request for the new 64-bit version in no-time. If this doesn’t happen it means that the application has been abandoned and you can forget about it if it’s nothing that you use frequently.