iOS 10.1 Beta 4 Out For Developers And General Public 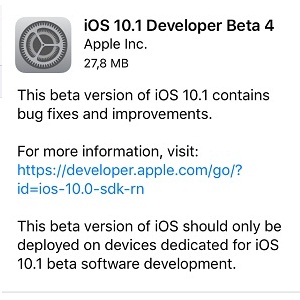 About an hour after the release of iOS 10.0.3 for iPhone 7 and iPhone 7 Plus users, Apple has also pushed out the iOS 10.1 Beta 4, first for Developers and minutes later for the Public testers too. Bringing the pieces together allows us to conclude that the official roll out of iOS 10.1 is only days away. This projection is also strengthened by the fact that there is no new feature introduced in Beta 4. In fact, Apple’s developers haven’t added anything spectacular since Beta 2.

Portrait Mode for iPhone 7 Plus owners made headlines when included in the iOS 10.1 Developer Beta 1. Beta 2 also came with some important new features that included a Replay button for the iMessage effects, along with the Auto-play Message Effects option that allows an iPhone to display one of the nine iOS 10 effects included in the Messages app.

Download iOS 10.1 Beta 4
The fact that we’re in the advanced stages of the beta testing phase, makes installing iOS 10.1 public beta worth considering. The test version is stable and trustworthy. If you want to install it on your iPhone use the steps described below: 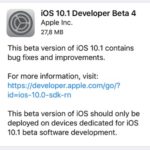 1. Perform a full backup of your device, with the help of iTunes. No matter how stable a beta is advertised to be, don’t skip this step and secure your data.
2. Download the iOS 10 beta profile, from the beta.apple.com. Sign in or sign up depending on your situation and save the profile on your device.
3. If you already own the profile, it means that you already run a public beta and you can skip step 2. Next, open Settings and browse to General -> Software Update.
4. Allow your iPhone some time to search over-the-air. Once Beta 4 is detected, tap on Download and Install to start the update process.
5. Be patient until the new software is downloaded and installed. Your iPhone will reboot at the end of the process. Provide your Passcode and you’re ready to go!

iOS 10.1 Beta 4 Update Log
The release note for this 4th beta includes the traditional statement that confirms “bug fixes and performance improvements”.
To update package is 27,8 MB in case you’re running Beta 3 and around 1,6 GB if you install this beta on an iPhone running iOS 10.0.x or older.