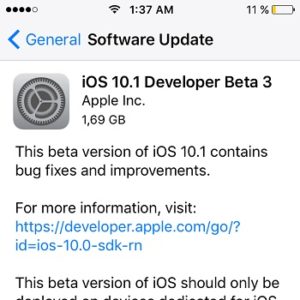 Apple has just released the 3rd test version for the upcoming iOS 10.1 update. That’s one week after Beta 2 and almost 1 month after the official launch of iOS 10. The Developer Beta was seeded first and was followed, a couple of hours later, by the Public edition. The release note announces bug fixes and performance improvements for this iteration. However, the update log was the same for Beta 1 and 2 and each brought a couple of interesting changes and new features.

However, by the time of writing, we couldn’t detect any new feature coming with the iOS 10.1 Beta 3 firmware. It’s either that we didn’t dig to deep, or we have to settle this time for the not so spectacular bug fixes and performance improvements. If you discovered a change from the second Beta please comment down below and we will update this article with your tip.

I can confirm though that the iOS 10.1 new additions like Portrait Mode for iPhone 7 Plus owners and the Auto-play Message Effect option are still available. I want to add to the list the Replay button available under iMessage bubbles that have been sent with an effect, as well as the redesigned iMessage app drawer.

How To Download iOS 10.1 Beta 3
1. If you already run one of the previous iOS 10 betas you can open Settings from the Home Screen and browse for General -> Software Update. Proceed with the over-the-air (OTA) upgrade as you normally do with any other general public iOS firmware updates.
2. If you run iOS 10 you need to download the beta profile on your iPhone. This is done the easiest by signing up for the Apple Beta Software Program and follow the instructions available on the website.

Tip: Check back later. We’ll update this post if new features are uncovered!