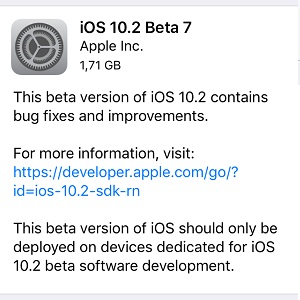 A little over a week ago we anticipated that Beta 4 for iOS 10.2 was also deemed to be the GM version, thus the final test firmware before the official release. Obviously, we have been wrong because, astonishingly, Apple managed to release three more betas within the last 9 days. This means that now you can download the iOS 10.2 Beta 7 over-the-air.

Don’t expect any other new features or visible changes between this latest test firmware and the 4th beta, reviewed by us here. It seems that Apple’s in-house coders are still working on under-the-hood tweaks that should make iOS 10.2 more stable and resource efficient. If no other hiccups will arise, it’s very likely that the second major update to the 10th iOS generation will be rolled out on Monday, December 12.

What To Expect From iOS 10.2
Some of the most important features expected to reach your iPhone and iPad with this new version are:
– Preserve Camera Mode: allows the built-in iPhone Camera app to remember the last shooting mode used and to select it when the app is called again.
– Unicode 9.0 emoji support which adds another range of emoticons and revamps the old ones.
– Send with Fireworks or Love full-screen effects added to the 9 already existing iMessage effects.
– New stock TV app that replaces the traditional Videos software.
– Apple Watch-like Emergency SOS feature for iPhone.

Fact: The features listed above are the most important ones we encountered in the test versions. Most of them will find their place in the public iOS 10.2 release. Stay tuned for our official review!