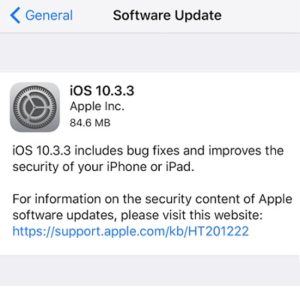 Although iOS 11 has entered its advanced beta testing stages, Apple still works on improving the current iOS generation, even if it’s due to expire within a couple of weeks. iOS 10.3.3 is available for update. This could be the last improvement to iOS 10 and it’s an important update especially for those iPhone, iPad and iPod touch owners that won’t be able to upgrade to the 11th iOS generation.

We’ve already informed you that the iPhone 5S is the oldest Apple smartphone that will receive iOS 11 compatibility. All earlier models will have to stick to the current iOS 10.3.3 or any other new iteration that could be seeded between now and mid September, when iOS 11 is expected to be launched.

iOS 10.3.3 Software Update Details
As mentioned above, Apple currently focuses on fixing bugs, patching security vulnerabilities and improving performance. These are practically some of the last tweaks that will ever be brought to iOS 10.
You can download this most recent roll-out over-the-air, from the Software Update screen available in the Settings app. The update is small, around 100 MB in size, depending the model of your iPhone or iPad.

Fact: For more details regarding the security content of this upgrade please check the official Apple announcement.