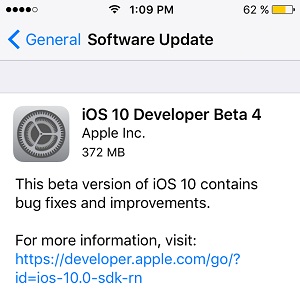 Apple has just seeded the 4th Beta of the iOS 10 Developer test program. This latest release comes with minor changes, compared to Beta 3. It includes redesigned Emojis as well as new smiley’s to promote gender equity. Many faces that represented male expressions are also duplicated with their female version. The iOS 10 keyboard sounds have been tweaked one step further. The Space, Delete, Return and Switching between numbers and characters keys have received personalized sounds.

The date has been added at the top of the Notification Center. This means that when you slide down from the top of your screen to reveal Today’s view and widgets, you’ll be also prompted with the current date. The same is available for swiping right from Lock Screen. Last but not least, animations and the whole iOS 10 test version runs smoother in Beta 4. We’re nearing the official release date scheduled for late September, so Betas are getting closer and closer to the Final version.

How To Install iOS 10 Beta 4
Important: No matter what your situation is, perform a full iPhone backup before proceeding with upgrading or installing an iOS 10 Beta.
A. If you run a previous Developer Beta
If you’re already running an iOS 10 Developer Beta version you can grab this latest seed very easy via the Over-The-Air update option. That’s by opening Settings -> General -> Software Update. Tap Download and Install after the iPhone finds the Beta 4 firmware. Provide your Passcode, Agree with terms and your iOS device will start downloading the latest test version. Beta 4 package is around 378 MB large, when you update from the 3rd version. Next, tap Install and wait until your iPhone, iPad or iPod touch completes the process. When ready it will automatically reboot. Insert your Passcode and you’re now running Beta 4!

B. If you Run The Public Beta
Apple has two iOS 10 Beta testing programs. The Developer one which is the first to receive a release and the Public one which is updated with the same tweaks a few days later once the Developer Beta confirms that is reliable. So, you can sign up for Apple’s Beta Testing Program and grab the iOS 10 Public Beta Profile. It allows you to Download & Install the latest Public Beta available and be able to update to Public Beta 3 (which is the same version with Developer Beta 4).
Update: iOS 10 Public Beta 3 is now available! Install it on your iPhone using the steps explained here.

C. If you Run iOS 9 Or Earlier
The latest official version rolled-out by Apple is iOS 9.3.3. If you wanna try out iOS 10 before it goes public you can follow the tips described at point B, or grab the Developer Beta Profile and install Beta 4 on your iPhone or iPad without owning and Apple Developer account.

iOS 10 Developer Beta 4 Upgrades
As mentioned in the introduction the changes compared to the previous beta are not many. Here is a list of them according with more details:
– New and redesigned Emojis
– Personalized Keyboard sounds for Space, Return, Back, Letters & Numbers Switcher