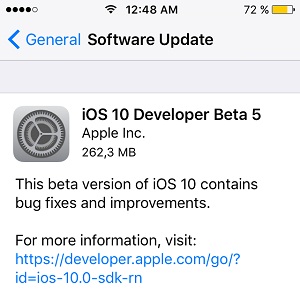 The official iOS 10 release date is getting closer by the day and Apple doesn’t want to be caught unprepared. They’ve just rolled out Developer Beta 5 and Public Beta 4 to allow fans to test drive the centenary iOS version. The releases are only a week after the Developer Beta 4 & Public Beta 3 versions become available to download. This breaks the pattern of a new roll out every second week.

The latest official iPhone, iPad and iPod touch firmware is iOS 9.3.4 which was seeded last week and aimed to patch the Pangu Team jailbreak. Along with iOS 10 Beta 5, Apple also seeded watchOS 3 Beta 5. Not only the iPhone will receive a new OS this fall. The Watch will also run a new faster and more efficient firmware!

First of all, you have to know that Developer Beta 5 and Public Beta 4 are one and the same. The first can be installed if you own a paid Appple developer account, while the Public Beta is accessible to everyone. The Developer firmware is always released first, while the Public Beta is released one day later. This time things are different though, as the Public Beta 4 was released only an hour after the Developer test version.
If your iPhone runs a previous iOS 10 Beta you can easily update over-the-air as you do with any official iOS software update.
Else, you have to download the iOS 10 Beta Profile from the Apple Beta Testing program, or from an Apple Developer account, in case you own one.

iOS 10 Developer Beta 5 Changes
Important: This paragraph is currently updating with more changes as we test the latest roll out.
– Locking Sound: confirming attempts from previous iOS 10 betas, Apple plans to change the iPhone locking acoustic. The new iOS lock sound has been added in Beta 1, removed, added back in test version 3 and removed again in Beta 4, audio is now back in Beta 5. This time it resembles with a sharp door shutting. Play the embedded audio available below and check out the new sound.

– Widgets Background: iOS 10 now makes a difference between stock widgets and those provided by third party apps. The later ones are differentiated by a darker background.
– Touch ID: works in App Store immediately after iPhone reboots. Until now your Apple ID Password was requested the first time you performed a download, after an iOS device restart.
– Apple Music has a redesigned icon, available in Control Center and through the rest of the OS.