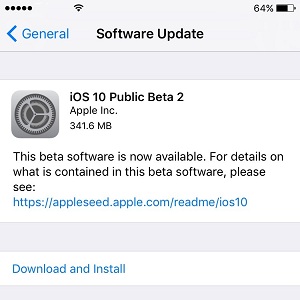 If you haven’t jumped the iOS 10 bandwagon already, now it’s another opportunity to do so. Don’t ask if there are glitches and hiccups because some of them aren’t filtered out completely until the launch of the official version, so you should expect the current test built to be slower at times and come with the usual problems of a test version. However, the pros outweigh the cons, in my opinion and you can safely start accommodating with the new iOS 10 Lock Screen interface, as well Messages app add-ons and much more.

How To Install iOS 10 Public Beta on iPhone
No matter if you’re reading this article when the Beta 2 was released or later, downloading and installing a Public Beta version is the same. We’ve shown you in the past how to grab iOS 9 on your iPhone, before it officially launched and now it’s time to recap for the 10th edition!
Important: Before starting with the iOS Beta Installation process we strongly recommend you to save a full iPhone backup with the help of iTunes. You can use later to restore your data if something goes wrong with your update process. 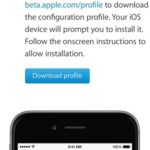 Step 1: From your iPhone, visit the Apple Beta Software Program. Log-in using your Apple ID (App Store) log-in credentials. Your username should be the email address you used for your Apple account.
Fact: If active you have to get past the two-factor authentication process. This means that you have to type a 6-digit code that will be displayed on a trusted Apple device. If you don’t own another Apple device, don’t worry you can choose to receive a text message on your iPhone with the 6-digit code. The text will sound like “Your Apple ID Verification Code is: xxxxx”.
Step 2: Enroll your iOS device for the current Beta Testing Programe by downloading the iOS 10 Public Beta Configuration Profile. A direct link is available here.

Step 3: Choose the device that you want to install the Profile on iPhone or Apple Watch. Next, tap on Install and the profile is saved on your smartphone.
Step 4: Open the Settings app and browse for General -> Software Update. Allow your iPhone time to find the latest available iOS 10 Public Beta version.
Step 5: From now on things unfold as with any other regular Software Update. Tap on Download and Install. Agree with the terms and confirm that you are informed about the risks that involve running a Beta version on your device. The software is first downloaded, the update verified and then installed.
Step 6: Go through the basic configuration steps and rapidly set up your iPhone after the installation process completes and your device reboots.

iOS 10 Public Beta 2 Changes
For the changes introduced by this version please refer to our article regarding Developer Beta 3, it’s practically the same thing!