iOS 11.0.1 Now Available With Bug Fixes For iPhones And iPads 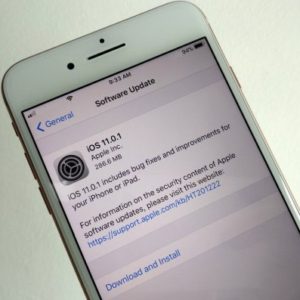 One week after the official release of iOS 11, the 11th iOS generation has received its first update that promises to fix a series of bugs detected in the iOS 11 Golden Master version. Apple labels the update as including “bug fixes and performance improvements” for your iPhone and iPad. One of the solved glitches is an Exchange e-mail server bug that prevented some users from sending email messages from iOS 11 via Outlook.com or an another Exchange mail account.

Some of us were expecting a fix for the static noise problem that is experienced by some 2017 iPhone flagship users. However, the iPhone 8 and iPhone 8 Plus owners will have to wait for the next iOS 11 software update release to get rid of that annoying cracking noise while performing a phone call. Apple confirmed via The Verge that they’re aware of the situation: “Our team is at work on a fix, which will be included in an upcoming software release.” 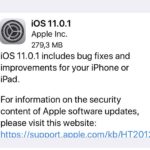 iOS 11.0.1 can be installed over-the-air on all compatible devices.
Open the Settings app from the Home screen and browse for General -> Software Update. Once the new firmware is found, tap on Download and Install to proceed with the update. Provide your Passcode agree with Apple’s terms and be patient until the 280 MB large upgrade package is downloaded and deployed on your iPhone or iPad.
Your iOS device will reboot when ready and you have to enter the Passcode one more time to activate Touch ID.

Fact: If you run iOS 10.3.3 or earlier, perform the same upgrade process and your iPhone and iPad will update directly to iOS 11.0.1!

Tip: To find out more about the 11th iOS generation check our iOS 11 section.