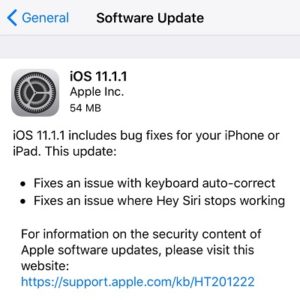 As I predicted on Saturday, when we provided a temporary fix that required a text replacement shortcut, Apple has just released iOS 11.1.1 to patch the annoying Keyboard autocorrect bug that was automatically changing any “i” typed on an iPhone and iPad to an “A” with a symbol. The Cupertino-based tech company first issued the fix a couple a days ago during the release of iOS 11.2 Beta 2 and we though that the official fix will be only released along iOS 11.2. But, it seems that the solution needed a test and after it proved to be OK, it was rolled out within a minor firmware update.

iOS 11.1.1 also brings a fix for the ‘Hey Siri’ bug that was experienced by a few iPhone owners that, out of the blue, couldn’t invoke the virtual assistant via voice command anymore. This tiny software update has build number 15B150 and is around 50 MB large, depending on which of the 39 compatible iPhone and iPad models you use for installing.

How To Install iOS 11.1.1
This new firmware is available over-the-air via the Settings app. Tap on General -> Software Update. Next, hit Download and Install, provide your Passcode and agree with Apple’s terms. Be patient until the new firmware is downloaded and install on your device.
Fact: If you’re running an iOS 11.2 Beta version, you first have to delete the iOS Configuration Profile, in order to allow your iPhone to detect iOS 11.1.1. After you erase the profile, reboot your device and attempt to update over-the-air!