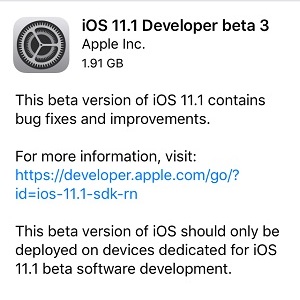 iOS 11.1 Beta 3 comes out one week after the 2nd test version and less than 1 month since the public release of iOS 11. In the meantime, the 11th iOS generation has been officially updated three times to fix various bugs, like exchange e-mail server glitch, crackling sounds during calls o touch ID unresponsiveness and haptic feedback issues in iOS 11.0.3. 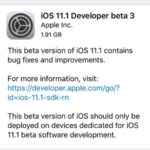 If you own a previous iOS 11.1 developer test version on your iPhone or iPad you can easily upgrade to Beta 3, over-the-air. Simply, open the Settings app and browse for General -> Software Update. Tap Download and Install as exemplified in the screenshot available nearby, provide your Passcode and agree with Apple’s terms. Be patient until the new firmware is downloaded and unpacked on your device. The iPhone / iPad reboots right before the process is completed!

Trick: You can also grab iOS 11.1 Dev Beta 3, even if you’re not a paying Apple developer. For this you need to download & install the iOS 11 Dev Configuration Profile as explained here. After you install the profile, restart your iPhone and attempt an OTA update, via the Settings app. iOS 11.1 Dev Beta 3 should be available!

iOS 11.1 Dev Beta 3 Changes
The release note of this upgrade includes the classic “bug fixes and improvements” message but we’re testing it out as we speak for changes. Any new features will be updated below:
– Reachability bug, preventing compatible iPhones from sliding down the Cover Screen for better access to notifications has been patched in this version. This glitch is present since the initial release of iOS 11.
– 3D Touch lag has been fixed, eliminating the delays between the physical gesture and the options menu appearance!

Tip: Check out the new Unicode 10 emojis available since Beta 2!