iOS 11.1 Beta 5 Released For Both Developers And Apple Beta Testers 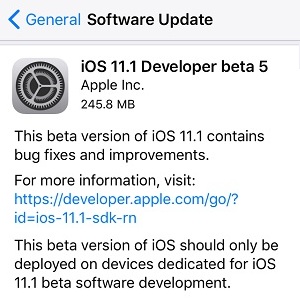 Apple has just seeded yet another test version for the upcoming iOS 11.1 software update. It’s the 5th Beta that comes only 3 days after Beta 4, which we ‘wrongly’ suspected as being a potential Golden Master version and one week after the roll out of Beta 3. The Cupertino-based tech giant is increasing the frequency of these releases, because we’re only a few days until the official roll out. We predict iOS 11.1 to go live together with the release of iPhone X, which will be available for pre-orders starting with October 27 and will start arriving to the first customers on November 3.

iOS 11.1 Beta 5 is certainly not the GM version because it’s only a 32 MB software update for those that own the previous Beta. It can be downloaded over-the-air if your iPhone, iPad or iPod touch runs a previous iOS 11 test version. Else, OTA updates become available only after you download the iOS 11 Configuration Profile as explained here (for Public Beta) or here (for Developer Beta, even without being a registered Apple Developer).

iOS 11.1 Beta 5 Facts
– iOS 11.1 Beta 5 has build number 15B93 and is available for download on 39 compatible Apple devices including iPhone, iPad and iPod touch models.
– The Software Update screen announces the classic bug fixes and improvements message.
– The Release Notes are identical with those available in Beta 4.
– Changes: to be updated here after testing.

What’s To Expect From iOS 11.1
– The Apple Pay Cash, person-to-person money transfer feature with the help of iMessage. A functionality that already has a serious competitor proposed by the joint venture of Facebook Messenger and PayPal.
– Hundreds of new Unicode 10 emojis.
– a return of the 3D Touch gesture shortcut for multitasking and App Switcher.
– various other bug fixes and performance improvements.