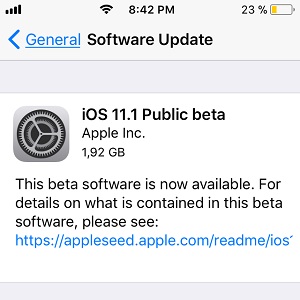 One day after the release of iOS 11.1 Developer Beta 1, Apple has also rolled out a Public beta version to volunteers from all around the world. tvOS 11.1 and macOS 10.13.1 have also received public test version, while the Cupertino-based tech company maintains its trend of not providing public betas for smaller watchOS iterations. This means that if you want to test watchOS 4.1 you have to install the iOS 11.1 Developer Beta on the paired iPhone and after that open the Apple Watch app and upgrade the smartwatch to its appropriate beta.

iOS 11.1 Public Beta 1 is downloadable over-the-air to all iPhone and iPad owners that have the iOS 11 Public Beta profile installed on their devices. Those, that haven’t the profile or have uninstalled it to return to the public iOS 11 release line and already grabbed iOS 11.0.1 on their Apple gadgets, have to download the profile from Apple’s Beta Program, as explained here.

iOS 11.1 Public Beta Updates
No one the features announced by Apple for iOS 11 that haven’t included in the release versions aren’t also included in this first beta. I’m referring to the Apple Pay Cash feature, iCloud for Messages or AirPlay 2.
Other changes spotted instead are minor ones like different animation that decelerates smoother when tapping the status bar to scroll back, as well as a new animation for switching between apps.
These changes are exemplified by Guillherme Rambo on Twitter:
1. iOS 11.1 Beta 1 new scroll to top deceleration animation

Is this scroll to top deceleration a new thing on 11.1 or a difference between devices? ???? pic.twitter.com/89tUK8WPxu