iOS 11.2 Beta 2 An Exclusive Software Update For The iPhone X 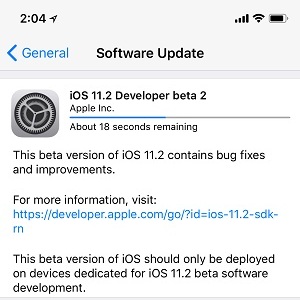 Only a few hours since the official launch of the iPhone X, Apple has already seeded the first software update that targets the 10th anniversary iPhone. I’m talking about the iOS 11.2 Beta 2 firmware that was just seeded as an exclusive update for the iPhone ‘Ten’. The iOS 11.2 beta testing phase started earlier this week when the Cupertino-tech giant released the 1st Developer beta, followed by its Public test counterpart one day later. However, back then the iPhone X wasn’t released.

Apple’s OLED display iPhone ships with iOS 11.0.1 pre-installed but if you are switching from an iPhone that was running a more recent firmware version, like iOS 11.1 for example, you have to first upgrade the iPhone X, over-the-air, to the same OS version or a newer one and then restore from a backup. iOS doesn’t allow you to restore a backup which was made on a newer version that the one that’s currently installed on the device!

Important: This means that if your old iPhone was running the iOS 11.2 beta and you backed it up, you will only be able to restore that upgrade on a new iPhone X, if you first upgrade the software on the iPhone ‘Ten’ to the newly released iOS 11.2 Beta 2! 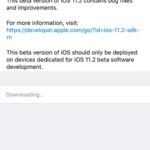 1. Install Beta Profile
Apple has seeded this exclusive test version for both Developer and Public beta testers. So, depending on which version you used on the old iPhone grab the iOS Beta Configuration Profile from either your Apple Developer account or from the Public Beta Software Program. Use the installation steps described here.
2. Update Over-The-Air
After you install the iOS Beta Configuration Profile your iPhone X reboots. Provide your Passcode after it boots up and open the Settings app. Browse for General -> Software Update. Tap on Download and Install. Provide your Passcode one more time and agree with Apple’s terms. Now, be patient until the new firmware is downloaded and installed on your device. The iPhone X restarts one more time before the process finishes!

Related: Learn how to force restart the iPhone X!