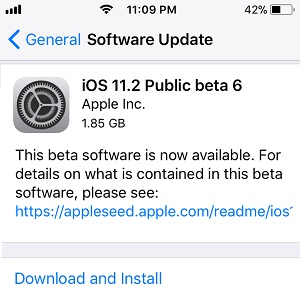 Apple has just seeded the 6th beta version for the upcoming iOS 11.2 software update, to both Developers and Public testers. It’s a Friday release coming towards the end of the testing stage, which makes it a strong candidate as being the Golden Master version of the 2nd major iOS 11 upgrade. iOS 11.2 Developer Beta 1 was seeded a little over a month ago, while the 5th test firmware was released on Tuesday. So, expect the official iOS 11.2 release as soon as next week!

iOS 11.2 is an important increment to the 11th iOS generation which finally launches Apple Pay Cash, Apple’s peer-to-peer payment system integrated into iMessages. It also enables fast wireless charging for the iPhone X and iPhone 8 flagships and talking about the 10th anniversary iPhone, iOS 11.2 includes a small bar in the right horn to expose the Control Center slide-down gesture.

The Control Center receives two info prompts clarifying how the Wi-Fi and Bluetooth toggles work in iOS 11. A slightly changed Now Playing section can also be noticed. More, you will be able to find the iPhone X and iPhone 8 specific wallpapers in iOS 11.2. Minor emoji changes, bug fixes and performance improvements are of course also included in this major iOS 11 update.

Tip: For more info regarding the iOS 11.2 new features and changes tap here!