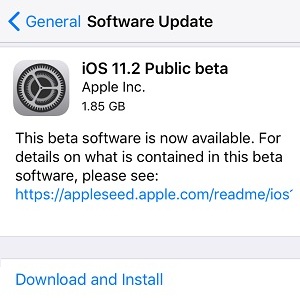 Two days after the release of the first iOS 11.2 Developer beta version, Apple has also started seeding an identical firmware labeled as iOS 11.2 Public beta version for all volunteers that want to try out and fine tune the 2nd major upgrade to the 11th iOS generation. Be aware, that the Cupertino-based tech giant recommend you to install beta software updates only on secondary iPhones and iPads, because your everyday usage might be significantly affected by the glitches found in a test firmware.

To be able to download and install iOS 11.2 Public beta on a compatible iPhone, iPad and iPod touch you need an account with Apple’s Beta Software Program. Register or Sign In and tap on the iOS 11 enroll your iOS device option. Next, hit the Download Profile label and follow the usual steps to grab the iOS 11 Configuration Profile . Reboot, your device after the installation is completed!

How To Install iOS 11.2 Public Beta 1
If you already run a Public iOS 11 test version on your device you can proceed with the standard over-the-air update from the Settings menu. Else, if you deleted the configuration profile and upgraded to iOS 11.1, or never had a beta version installed on your device, proceed as follows:
1. Grab the iOS 11 Configuration Profile from Apple’s Beta Software platform, as explained above.
2. Reboot your iPhone or iPad.
3. Open Settings from the iOS Home Screen.
4. Browse for General -> Software Update.
5. Tap on Download and Install. Provide the device’s Passcode, agree with terms and be patient until the new firmware is installed!

iOS 11.2 Public Beta Changes
To be updated after testing.

Fact: If you also plan to install watchOS 4.2 Beta on your Apple Watch, make sure that you opt for the iOS 11.2 Developer beta version, because Apple’s smartwatch doesn’t have a public test firmware for watchOS 4.2!