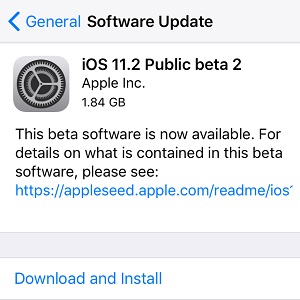 Apple has just seeded the 2nd Public beta for iOS 11.2 which includes the much awaited Apple Pay Cash feature that allows users to send peer-to-peer payments to iMessage contacts. The feature was first announced in May during WWDC 2017. but wasn’t included in the initial iOS release. It also skipped the first major iOS 11.1 iteration. However, third time’s a charm and the person-to-person payment option will be finally available to compete with Facebook Messenger and PayPal’s joint-venture that offers a similar feature, but which is available cross-platform!

iOS 11.2 Beta 2 also brings the fix for the annoying Keyboard autocorrect bug that surfaced with the release of iOS 11.1 and caused the automatic replacement of the “i” letter with an “A” and a symbol. This means that non-beta testers will have to wait until the official release of iOS 11.2 to get rid of the glitch.

How To Install iOS 11.2 Beta 2
If you already run a beta on your iPhone or iPad, updating to this 2nd test version is available over-the-air via the Settings app.
Else, you have to download the iOS Beta Configuration Profile from Apple’s Beta Software Program. Log-in or sign-up for a new account and install the Profile as explained here.
After you install the profile, and the iPhone reboots, provide the Passcode and open Settings. Tap Download and Install and let your device upgrade to this new test firmware.

Fact: iOS 11.2 Public Beta 2 has a build number 15K5090c and is available for all compatible iPhone, iPad and iPod touch devices.