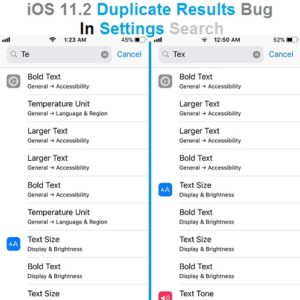 iOS 11.2 has been released ahead of schedule to patch a nasty date bug that caused iPhone and iPad restarts. This roll out rush might be the cause of another minor glitch that found its way in one of the most popular mobile operating systems available. I’ve just noticed that the search option within the Settings app, displays duplicate results!

To replicate the issue, open Settings from the iOS Home screen and type any popular keyword. In the above screenshot I used the word “text”. Typing the first two letters brings up the first hints about duplicate results. If you input the third letter, duplication is obvious and annoying. Yes, I can live with that but it’s one more bug added to the long list already uncovered in this 11th iOS generation. Just remember about the Keyboard autocorrect problems, Messages crash on the new iPhone X, Auto-Lock problems and more.

Fix: At the moment there isn’t any known solution. Restarting your iPhone doesn’t solve it! Most likely this glitch will be fixed in an upcoming minor software updated, probably labeled iOS 11.2.1. Nevertheless, it will be only seeded to patch some other bugs too. Apple won’t seed a new firmware just for this minor Settings search problem!

Fact: Do you encounter this problem too? I was able to replicate it both on an iPhone 5S, which is the oldest iPhone model compatible with iOS 11 as well as on the newest iPhone X!