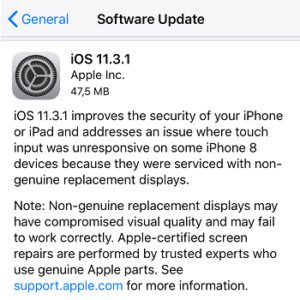 As expected Apple has rolled-out iOS 11.3.1 with the main goal of patching a bug that caused some iPhone 8 Touchscreens to become unresponsive. We’re talking about those devices that have been serviced by third party companies which use non-genuine replacement displays. It’s an issue that surfaced after the official release of iOS 11.3. We’ve covered it and provided a temporary fix, but now it’s time to upgrade and solve the issue permanently.

iOS 11.3.1 is the 13th update of iOS 11 and comes almost one month after the third major iteration of the 11th iOS generation. Besides the important fix described above, this software update also brings security improvements for your iPhone or iPad. We definitely encourage you to upgrade over-the-air from the Settings app. Browse for General -> Software Update and tap on Download and Install to start the process. Follow the usual steps and you’ll have the latest iOS version installed in a few minutes on your Apple smart device.

Unresponsive iPhone 8 Touchscreen Accidental Bug Or Intentional Block?
Considering the Apple was prompt to patch solve the unresponsive iPhone 8 issue, we can assume that this was only a bug the slipped with the release of iOS 11.3. However, although it looks like a bug I think that the Cupertino-based tech company has intentionally included this bug to make people aware that some service providers don’t use genuine parts and direct future repairs to their official shops and even increase purchases of their AppleCare+ warranty package!
A note included in the iOS 11.3.1 update log emphasizes this:

Discussion: What’s your opinion about this subject? Where are you repairing your iPhone. Are you covering it with an AppleCare+ insurance or you prefer cheap third party service shops?

Related: Check out the most important 10 new features of iOS 11.3!