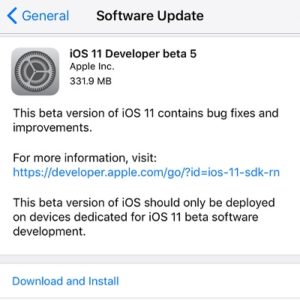 Apple continues the beta testing phase of iOS 11 as it just seeded the 5th Developer Beta version along with the 4th Public Beta edition. The two software packages are basically one and the same. The numbering difference is due to the fact that paid Apple Developers have been the first ones able to download the 11th iOS generation right after it’s preview during the opening day of WWDC 2017. Public beta testers have joined along the way via Apple’s volunteer-based Beta Software Program.

By now, most of the spectacular new features and updates coming with iOS 11 have been released in the early test phases. iOS 11 Beta 5 and any upcoming built will focus on fine tuning these new functions, improve performance and fix the obvious bugs. If you’re already involved in iOS 11 testing you’re surly aware of the new configurable Control Center, revamped App Store, updated Notification Center, Screen Recording feature and many more. 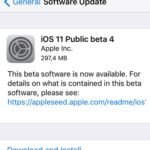 A. Active Testers
As mentioned above, if you’re already running the Developer or Public beta test version on your iPhone or iPad you’ll be able to update to this latest release OTA. Tap on Settings -> General -> Software Update and allow your device to search for the new version. Hit Download and Install, agree with terms and proceed the same way you do when performing a regular Software Update.

B. First Timers
If your Apple device is running the regular iOS 10.3.3 or an earlier version you will first have to download the iOS 11 Beta Profile. This is achieved the easiest by enrolling to the Beta Software Program. You only need your Apple ID log-in credentials. Check out our step-by-step tutorial and install iOS 11 beta on your iPhone and iPad in 10 easy steps! 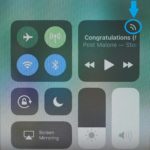 According to the Software Update screen Apple advertises this version as containing bug fixes and improvements. Our tests have uncovered the following notable changes to the previous version:
– the Music panel from the Control Center has been slightly tweaked. It’s now able to display a small animated signal-icon in the top-right corner. It starts blinking whenever new audio sources are available such as AirPods, speakers or different AirPlay devices. Tapping it opens the source list and allow you to easily change the playback source if needed!
– iCloud Messages feature introduced in the earlier test version has been removed for now. Apple confirmed that they will be reintroduced in an upcoming version. This functionality allowed iMessages to be stored in your iCloud account.
– The Screen Recording status bar available at the top of the iPhone’s screen is now red, instead of blue. This indicator has the role to make you aware that an ongoing screen capture is taking place.
– FaceTime Live Photos setting is now enabled by default allowing you to capture animated pictures while engaged in a video call.