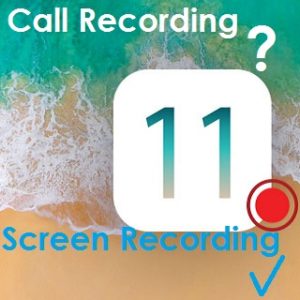 Famous iOS debunker, Guilherme Rambo, has found an interesting sound file within the iOS 11 springboard. The .wav format audio file is labeled as “call_being_recorded” and it provides a short audio with a male’s voice informing that “This call might be recorded for quality insurance purposes.” Does this mean that the 11th iOS generation comes with built-in call recording capabilities?

We’ve already informed you that iOS 11 will bring the much awaited Screen Recording feature and all compatible iPhone models. But is Apple going one step further and planning to allow users to natively record incoming and outgoing smartphone calls? At the moment recording calls ongoing on your iPhone is only available with the help of third party apps, that can be downloaded from the App Store and are reviewed here.

iOS 11 Call Being Recorded Audio File
Listen to the above mentioned media file found in the iOS 11 springboard:

Fact: Screen recording on iOS 11 doesn’t work when your iPhone plays of video, to avoid any copyright violations. The feature is also automatically disabled during and ongoing call. Do you think that Apple will allow us to natively record calls on iPhone soon?