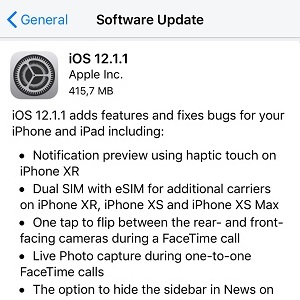 After several weeks of beta testing, Apple has rolled out iOS 12.1.1. This the third software update of the 12th iOS generation after the minor iOS 12.0.1 upgrade and the important iOS 12.1 release. According to Apple iOS 12.1.1 “adds features and fixes bugs” for your iPhone and iPad.

Among the new features highlighted on the software update screen we find extended support for eSIM on compatible devices. This means that the iPhone XR, iPhone XS and iPhone XS Max owners have more carriers that support Apple’s Dual SIM option. Another important change coming in iOS 12.1.1 is the updated FaceTime interface that now allows you to change between rear- and front-facing cameras with a single tap. Also, there is an option to capture Live Photos during one-to-one FaceTime calls.

iPhone XR owners haven’t been left out either. To compensate the lack of 3D Touch, Apple has enabled Lock Screen notification preview with the help of haptic touch. This allows users to long press on a notification in order to expand it and unveil additional content.

Also worth mentioning is that iOS 12.1.1 includes support for the Apple Watch Series 4 ECG feature. This will become available along with watchOS 5.1.2 and will allow smartwatch owners to perform a single-lead ECG reading by placing the finger on the Watches Digital Crown!

How To Update iOS 12.1.1
As usual, over-the-air is the best and quickest way to update to the most recent iOS version. Open the Settings app, tap on General and select Software Update. Once iOS 12.1.1 is found, review the update log and hit Download and Install. Make sure that the device’s battery level is over 50%. Provide your Passcode, Agree with the terms and be patient until the new software is deployed on your iPhone or iPad.

iOS 12.1.1 adds features and fixes bugs for your iPhone and iPad. Features and improvements include:
– Notification preview using haptic touch on iPhone XR
– Dual SIM with eSIM for additional carriers on iPhone XR, iPhone XS, and iPhone XS Max
– One tap to flip between the rear and front-facing camera during a FaceTime call
– Live Photo capture during one-to-one FaceTime calls
– The option to hide the sidebar in News on iPad in landscape orientation
– Real-time text (RTT) when using Wi-Fi calling on iPad and iPod touch
– Stability improvements for dictation along with VoiceOver