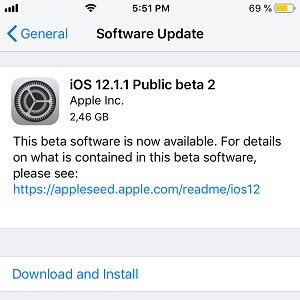 After rolling out iOS 12.1, Apple has already started to test out the upcoming iOS 12.1.1 software update. The first beta aimed for Developers was released one week ago. Recently, the Cupertino-based tech giant has seeded the 2nd Developer beta and an identical version for public beta testers. iOS 12.1.1 Public Beta 1 is available for download after you install the iOS 12 Configuration Profile from the Apple Beta Software Program, as described here.

As expected iOS 12.1.1 will be a minor software update that will include new features, bug fixes and improvements. Some of the changes that we already spotted during our iOS 12.1.1 Public Beta 2 review is the reintroduction of the Live Photos option during a FaceTime call, as well as other improvements to the FaceTime user interface. A revamped bottom bar is now available with quick controls available during and ongoing call. User can easily mute a call or flip the camera. Sliding-up from this bar also unveils further options available during your FaceTime conversation.

Other iOS 12.1.1 Beta 2 Changes
– The new iPhone XR, iPhone XS and XS Max Dual SIM feature receives an additional option that allows the user to turn off the physical SIM and prioritize the eSIM.
– The Apple Watch app icon is tweaked to make it compatible with the new Apple Watch Series 4 design.
– The Apple Watch app receives support for the new Apple Watch complications introduced by watchOS 5.1.2 for the Infograph Watch Face.
– Apple News also receives a new option that allows users to hide the sidebar when using the app on an iPad in landscape mode.