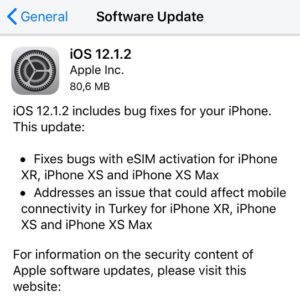 Apple has already released iOS 12.1.2. This 4th iOS software update comes earlier than expected, considering that only a single beta test version was issued before the public release. Unusual is also the fact that iOS 12.1.2 is only available for iPhones. iPads aren’t included in this update! The release note announces “bug fixes for your iPhone”. More specifically, a bug that prevented eSIMs from properly activating has been patched.

Remember that the Dual SIM feature is only available for the iPhone XR, XS and XS Max owners. It finally enables the option to use two carrier contracts on the same iOS device, a premiere for Apple smartphones. The same 2018 iPhone flagships, that operate in Turkey, receive a patch for mobile connectivity interference.

How To Update To iOS 12.1.2
As usual upgrading to this newest release is done over-the-air from the Settings app. Browse for General -> Software Update and hit Download and Install once the new release is detected. Provide iPhone Passcode, agree with terms and be patient until the under 100 MB update is deployed on your iOS device. The smartphone reboots after the installation process completes.

Hidden iOS 12.1.2 Changes
iPhone owners from China have reported additional changes described in the iOS 12.1.2 release notes. It seems that Apple has rushed this software update in order to remove patented Qualcomm functionality. The Cupertino-based tech giant has received last week a preliminary iPhone sales ban in China after a court has ruled that the U.S. tech giant has infringed on two Qualcomm patents. This has to do with certain actions related to resizing and reformatting photos, as well as managing apps while using a touch screen.

Conclusion: The app closing animation in the App Switcher is now different in China. This allows Apple to avoid infringing Qualcomm’s patent. The apps’ cards shrink into themselves instead of sliding away towards the top part of the screen, when you swipe them up.