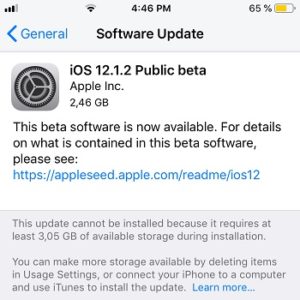 If you’re an early software adopter you should be pleased to find out the Apple has recently seeded the first public beta of iOS 12.1.2. We’re talking about the next planned software update for your iPhone and iPad. This comes almost a week after the release of iOS 12.1.1, a rollout that included extended eSIM support, a FaceTime redesign and more.

Differently from the past betas of iOS 12, there’s no new feature that we could detect while testing out this initial public beta. According to Apple’s release notes iOS 12.1.2 will focus on “bug fixes and improvements”, so don’t expect anything spectacular. The Apple Watch will also get a software update, labeled watchOS 5.1.3. Developers already had a look at it and the same pattern is confirmed. Only under the hood changes to be expected! 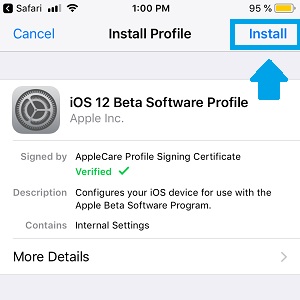 If you want to test the upcoming iOS version yourself, follow the steps described below:
1. Log-in / Register to the Apple Beta Software Program website, with your Apple ID credentials.
2. Use this link to download and Install the iOS 12 Beta Profile on your iPhone or iPad.
3. Reboot your iOS device when requested.
4. After the respring, open the Settings app and browse for General -> Software Update.
5. Perform the over-the-air update as usual by using the Download and Install button, providing your Passcode, agreeing with the terms and being patient!

Important: Delete the iOS 12 Beta Profile whenever you want to return to the public software update cycle. Else, the Software Update screen will only search for betas and you will miss out on the general public releases. To delete the iOS 12 Beta Profile proceed as follows:
1. Open the Settings app and tap on General.
2. Scroll all the way down to Profile.
3. Tap on iOS 12 Beta Software Profile.
4. Use the Remove Profile option.
5. Provide your Passcode and confirm the removal.
Fact: You have to reboot your iPhone / iPad for the changes to take effect.