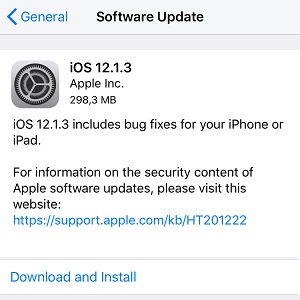 iOS 12.1.3 is the 5th software update released by Apple to enhance iOS 12, since its September launch. It comes with a series of bug fixes for the built-in Messages and Photos app. It also improves CarPlay functionality for the 2018 flagships like the iPhone XS, XS Max and XR. The HomePod also receives its series of fixes as you can inform yourself in the detailed release notes provided below.

iOS 12.1.3 can be downloaded, as usual, over-the-air from the Settings app. Simply browse to Settings -> General -> Software Update and hit the Download and Install label. Be patient until the new version is deployed and installed on your iPhone or iPad. The device reboots and you have to provide your Passcode before you can resume using your gadget! 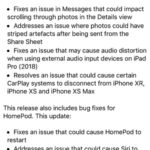 Related: Find out more about the previous iOS 12.1.2 update!