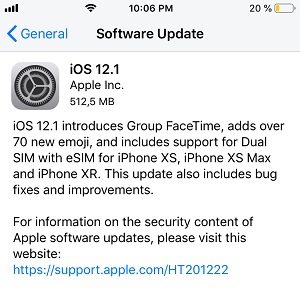 Apple has just rolled out iOS 12.1, the first major update to the 12th iOS generation with much awaited new features like Group FaceTime, Dual SIM support for the 2018 iPHone flagships, as well as 70 new emojis and a bunch of bug fixes and performance improvements. This release comes three weeks after a minor software update, labeled iOS 12.0.1 which was aimed at fixing the iPhone XS and XS Max charging bug, WiFi connectivity problems and more.

You can easily update any compatible iPhone and iPad to iOS 12.1, as usual, from the Settings app of your device. Browse for General -> Software Update and tap on Download and Install when the new version is confirmed. Enter your gadget’s Passcode, wait until the update package is downloaded. Agree with Apple’s terms and allow the device to install the new software version. If you have Automatic Updates enabled, your iPhone will automatically migrate to iOS 12.1 during the night, if the device is connected to WiFi and a power source.

17 iOS 12.1 Changes, Fixes And Improvements
1. Group FaceTime: This feature was initially announced for the public release of iOS 12, but was delayed for additional tests. Now, it’s officially available to everyone that updates to iOS 12.1 Perform a video call with up to 32 iOS contacts! More info available here.
2. New Emoji: As we reported during the beta testing stages of iOS 12.1, this important release adds around 70 new Unicode 11.0 compatible emojis to your iPhone and iPad. Check all of them here.
3. Dual SIM support: along with the arrival of the iPhone XR all three 2018 iPhone flagships are now able to support an eSIM along the physical nano-SIM along you to own and operate two separate contracts from the same carrier or from two different carriers. For more info please tap here.
4. Real-Time Depth Control: iOS 12 premiered a spectacular new feature called Depth Control that allows you to adjust the amount of blur used in a Portrait Mode photo. In iOS 12.1 thing go one step further as you’re able to control the bokeh effect in real-time, in the viewfinder, before you snap the picture!
5. Improved Mobile Connectivity: iPhone XS, XS Max and XR owners have continuously complained about the poor Mobile Connectivity of their brand new smartphones. This has been apparently addressed in iOS 12.1
6. Reset ScreenTime Passcode: Now, you can reset your kid’s Screen Time Passcode with the help of Touch ID or Face ID authentication procedures. If you forgot your own Screen Time Passcode, here is how to change it!
7. BeautyGate Fix: Ever since the release of iOS 12, iPhone XS and XS Max owners complained of excessive face smoothing of selfies captured with the new flagships. We’ve promptly provided you a temporary beautygate fix and now with iOS 12.1 you also have the official one!
8. Messages Fix: Erroneous messages merging into a single thread has been patched. This occurred when two users were signed in with the same Apple ID on multiple iPhones.
9. Voicemails Fix: Patches as bug that prevented some voicemails from appearing in the Phone app.
10. Contacts Patch: The Phone app also receives a fix for phone numbers that weren’t accompanied by the contact name when displaying.
11. Screen Time Reporting Fix: that caused some specific websites not to be included in the activity report.
12. Family Sharing Glitch: Adding or removing family members from this feature wasn’t working properly. This has been solved.
13. Air Quality Description Fix: Mislabeled air quality descriptions have been corrected.
14. Performance Management Feature: Newer iPhone models like the iPhone X, 8 and 8 Plus receive the controversial Performance Management feature that throttles down device performance when the battery can’t handle the normal load, in order to prevent and unexpected shutdown.
15. Genuine iPhone Battery Info: Battery Health app can now inform you a genuine Apple battery is powering your iPhone XS, XS Max or XR.
16. VoiceOver Improvements: The reliability of VoiceOver has been improved in Camera, Siri and Safari.
17. MDM Device Enrolment Fix: An issue that could report an Invalid Profile error for business users has been solved!

iOS 12.1 Full Update Log
Check out the following video to review the full updated log of this iOS version: