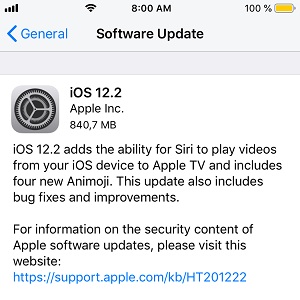 The second big update of iOS 12 has rolled out and here you can find info about all the new features, fixes and performance improvements coming along iOS 12.2. This latest iPhone and iPad software update follows iOS 12.1.4 and is available for all compatible devices. To grab it straight away, open the Settings app and browse for General -> Software Update. Hit the Download and Install button, provide your Passcode and follow the usual software update steps.

The iOS 12.2 firmware introduces four new Animojis for the iPhone X and later iPhone models as wells as the iPad Pro 12.9-inch (3rd gen) and the iPad Pro 11-inch. Meet the giraffe, shark, boar and owl in the image available below. Apple News has become available for the first time for iOS users outside of the United States. Canada and Australia are the add-ons, with the Canadians being able to access content in both French and English language. Along with this expansions the Apple News+ subscription has premiered requiring users to pay a subscription to get unlimited access to the content of the platform. 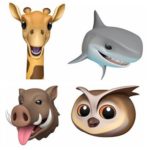 Other notable changes coming with this update are:
– a redesigned TV remote control in the Control Center, which now expands on the entire iPhone screen.
– Siri is now able to support media playback from iPhone to Apple TV or third-party TV sets when iOS 12.2 gets paired with tvOS 12.2
– the Wallet app has been improvement and prepared for the release of the upcoming Apple credit card.
– a new “Add Money” option is available for the Apple Pay Cash service in the Wallet app.
– Searching Google in Safari is now easier with the help of the new search arrows.
– Websites that don’t support SSL connectivity are listed as “Non Secure” at the top of the Safari menu bar.

iOS 12.2 Full Update Log
Below you can review Apple’s full update log about the new features, changes and improvements coming in this software update. Use the YouTube video embedded below to see how the update displays on an iPhone:

The full transcript of the iOS 12.2 update log can be read here:

Apple News+
– Apple News+ is a new subscription service that extends the Apple News experience with hundreds of magazines and top newspapers
Our editors handpick top articles and magazine issues, and you also get personalized recommendations on the topics most interesting to you
Automatic downloads make it easy to read magazine issues offline
– Apple News is now available in Canada, with a free experience that includes handpicked Top Stories, a personalized Today feed, and support for both English and French
– Apple News+ is available in the U.S. and in Canada, with dozens of additional Canadian magazines

Siri
– Ask Siri on your iPhone or iPad to play any video, show, movie, sports game, or channel on Apple TV. For example, “Hey Siri, play Free Solo on my TV”

AirPlay
– Dedicated TV controls in Control Center and on the Lock Screen give you quick access to TV controls
– AirPlay multitasking for video allows you to browse other apps, as well as play other short form audio and video files locally on your device without interrupting AirPlay
– AirPlay destinations are now grouped by content type making it faster for you to find what device you want to play to

Safari
– Website sign-in now occurs automatically after filling credentials with Password AutoFill
– Warnings now appear when loading unencrypted webpages
– Removes support for the expired Do Not Track standard to prevent potential use as a fingerprinting variable; Intelligent Tracking Prevention now protects against cross-site tracking by default
– Smart Search Field queries can now be modified by tapping the arrow icon next to search suggestions

This update also includes other improvements and bug fixes. This update:
– Supports Air Quality Index in Maps for US, UK, and India
– Includes information in Settings on how much time remains on your device’s warranty period
– Supports real-time text (RTT) for phone calls made through a nearby iPhone on iPad and iPod Touch
– Displays a “5G E” icon for iPhone 8 and later, iPad Pro 12.9-inch (3rd generation) or iPad Pro 11-inch indicating that users are in an area where AT&T’s 5G Evolution network is available
– Improves quality of audio recordings in Messages
– Improves stability and performance of Apple TV Remote on iOS
– Fixes an issue that prevented some missed calls from appearing in Notification Center
– Addresses an issue where a badge notification could appear on Settings even though no action is needed
– Addresses an issue in Settings > General > iPhone Storage where the storage size of some large apps, the System category, and the Other category in the storage bar graph could be incorrect
– Fixes an issue that could cause Voice Memos to automatically play back recordings after connecting to a car Bluetooth device
– Resolves an issue that could cause Voice Memos to temporarily prevent renaming a recording.”

Controversial: iOS 12.2 adds a new “5G E” cellular signal icon for AT&T users. This replaces the standard LTE icon, but is mainly a redesign, because no iPhone and even the network itself doesn’t support 5G connectivity at the time of writing. For more details read here.