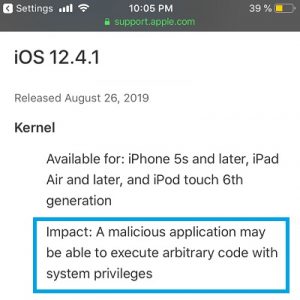 As expected, Apple has reacted fast and released iOS 12.4.1 in order to patch a security vulnerability that allowed hackers to develop a rare Jailbreak tweak for iOS 12.4. This accomplishment is a very rare feat. Jailbreaking the current iOS release without a computer hasn’t been achieved for a long time. The vulnerability uncovered in iOS 12.4 was allowing iPhone and iPad jailbreaks for all devices equipped with the the A7 to A11 chips. Basically we’re talking about almost the entire iPhone range that’s iOS 12 compatible, starting from the 5S model up to the iPhone X. The only non-jailbreakable iPhones, at the moment, that run iOS 12.4 are the iPhone XS, XS Max and XR flagships.

So, if you’re on iOS 12.4 and are jailbroken or plan to wait for an available jailbreak, if you’re an A12 chip owner, don’t upgrade to iOS 12.4.1! If you’re not a jailbreak enthusiast we encourage you to update to this latest OS version. Once upgraded to 12.4.1 you won’t be able to downgrade to iOS 12.4, because Apple will surly soon stop signing it (iOS 12.4 is still signed at the time of writing). 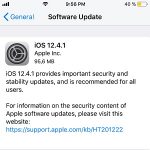 There’s no doubt that iOS 12.4.1 has been released to patch the iOS 12.4 Jailbreak exploit. The size of the update is around 100 MB and the Cupertino-based tech giant mentions that this latest roll out brings important security and stability improvements.
Things get even more clear in the security content of the update that reads “A malicious application may be able to execute arbitrary code with system privileges”.
Fact: the iOS 12.4 security vulnerability was a rare slippage by Apple allowing hackers to release a jailbreak for the current iOS version available!

How To Update To iOS 12.4.1
Updating is available over-the-air. You can either wait for the automatic software update or download it manually from the Settings app. All that you have to to is browse for Settings -> General -> Software Update and perform the usual steps. Tap on Download and Install, provide your Passcode, agree with Apple’s terms and be patient until the new software version is deployed and installed on your iPhone or iPad.