iOS 12.4 Allows You To Wirelessly Migrate Data From Old To New iPhone 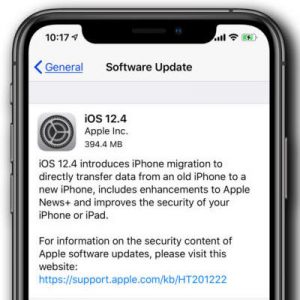 iOS 12.4 is the 4th and last major software update to the 12th iOS generation. iOS 13 has already reached the 5th Public Beta version and is about one month away until its worldwide public release alongside the 2019 iPhone flagships, the iPhone 11, iPhone 11 Max and iPhone 11R. But until then, let’s check out was iOS 12.4 brings new to the table and what you have to do in order to update to the latest version.

Starting from iOS 12.4 onwards all iPhone migrations will be much easier. Instead of restoring a backup from iTunes or iCloud, iOS is now able to wirelessly migrate data from your old device to your new iPhone during the setup process of your latest acquisition. The two terminals have to be connected to the same WiFi network for the data transfer to work. 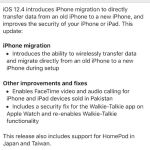 iOS 12.4 Extended Software Update Log
Besides the above mentioned new feature, Apple also advertises iOS 12.4 for improving the security of your iPhone or iPad.
Other improvements and fixes include a security fix for the Apple Watch Walkie-Talkie app. It also brings back the Walkie-Talkie functionality of the wrist-worn device.
Users from Pakistan can now also benefit from the FaceTime video and audio calling feature.
Last but not least support for HomePod is now also available in Japan and Taiwan.

iOS 12.4 Software Update Facts
As usual the software update is available over-the-air. To update you have to open the Settings app and browse for General -> Software Update. Tap the Download and Install option and the upgrade process starts after you provide your Passcode and Agree with Apple’s Terms.
If you upgrade from iOS 12.3.x the update package is around 400 MB large. Else, you will have to deal with a few GBs because you will also need to download all the other iOS 12 new features that are missing from your device.

What’s Missing From iOS 12.4?
Many of us expected the Apple Card service to be included in this last major iOS 12 update. However, Apple seems to have decided to postpone it a bit more. The Apple Card is a credit card developed by Apple, primarily designed to be used in conjunction with Apple Pay on compatible devices like the iPhone and Apple Watch. However, the Apple Card won’t be used only for digital payments. You will also get a titanium-made physical card that you can use in the stores like any other credit card.

Related: Do you want to try out iOS 13, before it becomes available to everyone. Here is how to install iOS 13 beta on your iPhone.