iOS 12 Is Now Live For All Compatible iPhones And iPads 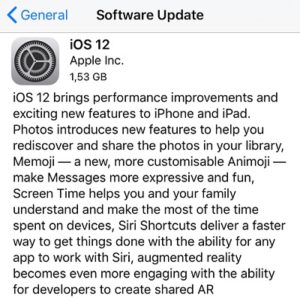 As promised, during the September 12 iPhone XS keynote, Apple has released, today, Monday September 17, its 12th iOS generation! iOS 12, a major update, comes with a bunch of new features and performance improvements to your iPhone and iPad. All that you have to do is visit the Settings app, tap on General and load the Software Update screen. Tap on Download and Install and allow your device to deploy and unpack the new version!

Of course, that you have to provide the iPhone / iPad Passcode, Agree with Apple’s terms and have a little patience. But, ones your smartphone restarts, nothing will be the same again! If you followed us this summer, you have already found out some of the new features included in iOS 12. I can remind you about the Grouped Notifications, new Animojis and the intriguing Memoji feature, Group FaceTime option and more.

iOS 12 Full Update Log
However, if you really want to find out all the details about what’s new in iOS 12, check out the highlights of the update log:

Fact: For an even more in-depth view, watch the following video and read everything what Apple has to say about iOS 12!

Tip: Stay tuned with iPhoneTricks.org, as we will go through all new features of iOS 12, in the upcoming weeks!