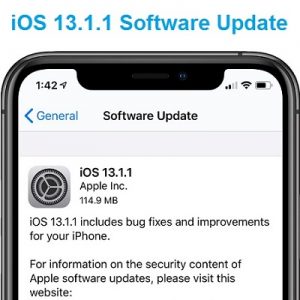 iOS 13 is a major step forward for the iPhone in terms of new features and functionality. However, Apple did not quite manage to sift all the bugs before the official release. iOS 13.1.1 is here to fix a series of problems that haven’t been patched by iOS 13.1https://www.iphonetricks.org/ios-13-1-adds-airdrop-with-ultra-wideband-on-iphone-11-11-pro-and-11-pro-max-and-more/. The software update log lists six bugs that have been patched. It includes a patch for those iPhones that experience unusual battery drainage as well for those that aren’t restoring from backups.

iOS 13.1.1 is available over-the-air in the Settings app. All that you have to do is tap on Settings and browse for General. Select Software Update and wait until iOS 13.1.1 is found. If you have enough storage space on your device and your iPhone battery level is about 50% you’ll have the Download and Install option active. Tap it. Provide your Passcode and Agree with Apple’s terms. iOS 13.1.1 will be downloaded and unpacked on your device in the upcoming minutes. The iPhone will restart after the installation is completed.

iOS 13.1.1 Software Update Log
As usual, all these incremental backups are labeled as including “bug fixes and improvements for your iPhone”. Below, you have the list with all six fixes mentioned by Apple in the update log:

Fact: iOS 13.1.1 doesn’t fix all important problems that we’ve reported. The car Bluetooth connectivity bug hasn’t been addressed yet. Neither has the No Subject, No Sender bug of the Mails app. Stay tuned for more updates!