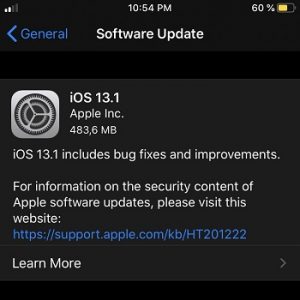 As expected, Apple has just released iOS 13.1 just 5 days after the major release of iOS 13. This rollout adds some features that haven’t been ready for the initial release, including AirDrop support with Ultra Wideband technology for iPhone 11, iPhone 11 Pro and iPhone 11 Pro Max. The Shortcut app is now supporting suggested automation as well as the possibility to share the ETA (Estimated Arrival Time) in the native Maps app.

iOS 13.1 is now also able to throttle CPU performance for the iPhone XS, XS Max and iPhone XR. This has been added to avoid unexpected shutdowns of the 2018 iPhone lineup. Throttling will be enabled once the Battery Health drops below 80%. More, iOS 13.1 can also detect if a battery on the iPhone is genuine or not. If you’re an iPhone XS owner or later, you will get a notification in case your device has received a battery replacement that isn’t original.

Fact: On top of these new additions iOS 13.1 comes with around 25 various bug fixes! The full update log is available below.

1. Open the Settings app.
2. Tap on General.
3. Select Software Update.
4. Tap Download and Install, after iOS 13.1 is detected by your iPhone.
5. Provide iPhone Passcode.
6. Agree with Apple’s terms and be patient until the update is downloaded and unpacked on your iOS device.
Fact: Update file is around 500 MB large. 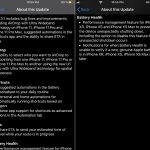 Apple highlights the Ultra Wideband AirDrop, the suggested automation in Shortcuts and the ability to share ETA in Maps as the most important new additions.
You can check the print-screen available nearby to read the official update log.
The new features are split in four categories: AirDrop, Shortcuts, Maps and Battery Health.
We’ve already covered above all of them. What’s also worth mentioning is that the built-in Shortcuts app is now installed by default once you upgrade to iOS 13.
Fact: Shortcuts also receives personal and home automations for shortcuts that run automatically based on triggers.

Related: Want to find out more about iOS 13. Tap here!