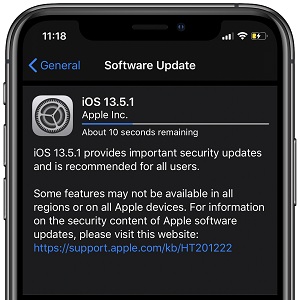 Apple has just released another iOS and iPadOS update. iOS 13.5.1 comes almost two weeks after the release of iOS 13.5, an important roll out that included the Exposure Notifications API, for COVID-19 tracking, automatic Prominence setting in FaceTime, easier iPhone unlocking for iPhones with Face ID when wearing a mask and more.

iOS 13.5.1 is a minor update in terms of size, but a very important one for the jailbreaking community. Right after the release of iOS 13.5, the ‘unc0ver 5.0’ tool was released which is able to jailbreak any signed iOS version starting all the way back with iOS 11.0 and until the recently released iOS 13.5. It seems that Apple has managed to detect the zero-day vulnerability and has now patched it. This means that updating to iOS 13.5.1 will close the door for jailbreakers. It’s expected that Apple will stop signing iOS 13.5 soon, which means that once updated, you won’t be able to downgrade in order to qualify for a jailbreak!

How To Update To iOS / iPadOS 13.5.1
If you’re not a jailbreak fan we recommend you to update as soon as possible to this most recent release. 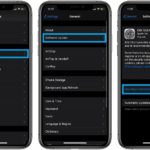 1. Open Settings.
2. Tap on General.
3. Select Software Update.
4. Tap Download and Install as soon as the iOS 13.5.1 update becomes available on the screen.
5. Provide your iPhone Passcode and be patient until the new version is downloaded (about 78 MB) and your device prepared for updating.
6. Tap Install Now. The iPhone will reboot as soon as the installation process is completed.

iOS 13.5.1 Software Update Log
Apple mentions that the update comes with security upgrades and that it’s recommended for all users. There’s no other info provided excepting for the link to the security content of the update.
Fact: The security content confirms that a security vulnerability related to the ‘unc0ver’ jailbreak has been patched!

Do you plan to upgrade to iOS 13.5.1 or you prefer to keep your jailbreak window option? Let us know in the comments section available below!

Related: watchOS 6.2.6 has been also rolled out to fix the same security vulnerability for the Apple Watch!