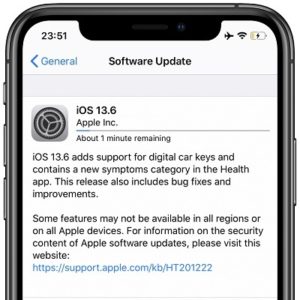 iOS 13.6 is accompanied by iPadOS 13.6, watchOS 6.2.8, macOS Catalina 10.15.6, tvOS 13.4.8 and Homepod 13.4.8 firmware version.
All releases can be downloaded over-the-air, from the Settings app, just like any other iPhone or iPad software update.
Apple has also seeded an iOS 12.4.8 incremental update for older iPhone models that aren’t compatible with the 13th iOS generation.
This shows that devices like the 7-year-old iPhone 5S haven’t been forgotten! 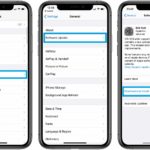 1. Open the Settings app.
2. Browse for General -> Software Update.
3. Tap on Download and Install on the iOS 13.6 software update screen.
4. Provide your iPhone or iPad passcode and be patient until the new version is downloaded and prepared for installing.
5. Tap Install Now and wait for the installation to complete. The Apple logo is displayed on your iPhone’s screen and the device will automatically reboot before the procedure ends.

1. Digital Car Keys
Once you update to iOS 13.6 your iPhone can also turn in to a digital Car Key that’s used in lieu with a physical key on compatible cars.
BMW is Apple’s first partner. If you’re the happy owner of any 1, 2, 3, 4, 5, 6, 8, X5, X6, X7, X5M, X6M and Z4 BMW car model that’s manufactured after July 1, 2020 you can enjoy the following new features.
– Unlock, lock, and ‘ignite’ any compatible car with your ‌iPhone‌.
– Share digital car keys quickly with iMessage.
– Use driver-specific profiles so you can configure shared keys for full-access or restricted driving.
– Securely remove digital keys from a lost device via iCloud.
Fact: Unlock and start your car with Power reserve for up to five hours after your ‌iPhone‌ runs out of battery.

6. Adds a new setting to choose if updates automatically download to your iPhone or iPad when on Wi-Fi.

Which is your favorite iOS 13.6 new feature? What about iPadOS 13.6? Share your feedback using the comments section available below!

Related: You might also want to update your Apple Watch to watchOS 6.2.8!