Posted in Leaks and Rumors by Patricia on November 26, 2020 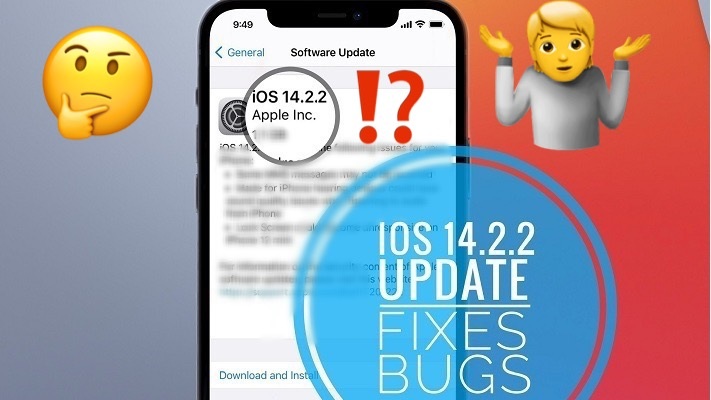 Apple is due to fix a series of serious iOS 14 bugs and we’re anticipating that an upcoming iOS 14.2.2 software update is imminent. The Cupertino-based tech giant has released iOS 14.2.1 exactly one week ago. However, this minor release is available only to the iPhone 12 lineup and focuses mainly on the major touch screen bug that was causing the Lock Screen to become unresponsive.

However, there are still plenty of iOS 14 bugs, that plague all compatible iPhone models and are yet to be solved. Apple is always prone to release updates that focus on bug fixes on a Thursday. So, the earliest release date for iOS 14.2.2, could be today!

Nevertheless, November 26, 2020 matches the Thanksgiving holiday in the United States. Will Apple gift iPhone and iPad users with some highly awaited bug fixes? Why not! While many don’t expect any software update during the Black Friday and Cyber Monday week, we’re eager to let Apple surprise us!

If we won’t get iOS 14.2.2 today when is the next likely release date?

Friday, November 27 could also qualify. However, Apple rarely seeds new software versions outside the Tuesday, Thursday calendar dates. Only in cases when very serious bugs surface after a new release, has the Cubertino-based tech giant released new iOS versions on Mondays, Wednesdays or Fridays. Considering that Apple has never issued software updates during weekends we can expect December 1, and December 3 as next potential release dates.

Here is a list of some of the most serious and frustrating bugs currently occurring in iOS 14:

When rolled out iOS 14.2.2 will surly be available for download over-the-air from Settings -> General -> Software Update.
Fact: We’ll update this article as soon as iOS 14.2.2 goes live. Follow us on social media and you’ll be among the first to find out.

The update log containing improvements and bug fixes will be updated here.

iOS 14.3 will bring among others Apple’s premium Fitness service. The company has promised to release this workout membership by the end of 2020. Common sense allows us to anticipate that iOS 14.3, which is currently beta tested, will be released before the Christmas Holidays. That’s less than a month. There is a chance that iOS 14.2.2 won’t be ever released, but in our opinion it is very small, because it would mean that we would have to live with the above mentioned bugs for at least two more weeks.

Related: If you’re eager to try out iOS 14.3, you can enroll to Apple’ Public Beta Software Program and install iOS 14.3 Beta 2 right now!