Posted in Reviews by Patricia on August 4, 2020 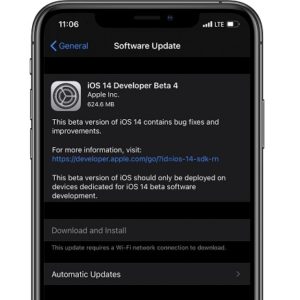 Apple has just released the iOS 14 Developer Beta 4 and the Public Beta 4 is live now (August 6).
If you’re a registered Apple Developer (paid membership) you can already visit the Settings app on your iPhone and iPad and download this 4th test version of iOS 14 respectively iPadOS 14.
If you’re a Public Beta subscriber (or you plan to become one), over-the-air update to iOS 14 Beta 4 are now available and downloadable from the Settings app.

In this article we take a look at what’s new in iOS 14 Beta 4 when compared to its predecessor the third Beta.
We also provide install tutorials for those of you that haven’t tried iOS 14 Beta yet and are planning to upgrade from iOS 13.6 or iPadOS 13.6.

With each new iOS 14 beta release expect to see less major enhancements and additions. To more we near to the public release the more delicate the fine tunes. However, we still managed to find some visible new features.
The following list is open. Please use the comments section to signal any other new features included in Beta 4, that aren’t mentioned in this article:

iOS 14 Beta 4 is the first version of the upcoming OS that includes the Exposure Notification API. This means that iOS 14 testers can now also download and use apps that use Apple’s and Google’s Exposure Notification system. It helps to alert individuals that have been in the close proximity of a COVID-19 infected person, in the 14 days. Extended details about how to enable COVID-19 Exposure logging are available here. Also check our detailed tutorial about how to use the iOS and Android COVID-19 Notifications feature.

Apple has used us to publish a new stock widget with every new iOS 14 beta that gets released. Beta 4 brings the Apple TV widget. You can glance what’s up next available for watching or continue from where you left off directly from your iPhone or iPad Home screen. The widget allows you to choose between 3 layout options, each coming in a different size: small. medium and large.

The 3D Touch feature has returned to all compatible iPhones. It had been removed in Beta 3.

If you plan to install the iOS 14 test version on your main iPhone, think twice before you act. You might wanna also read our 5 reasons why you shouldn’t do it!
But if you decide to move on, please perform a full backup of your iPhone before proceeding.

A. Upgrading from Beta 3

If you plan to update from a previous iOS 14 Beta version, things should be easy.
1. Open the Settings app on your iPhone or iPad.
2. Browse for General -> Software Update.
3. Tap Download and Install, as soon as the iOS 14 Beta 4 update is detected.
4. Provide your Passcode and agree with Apple’s terms.
5. Be patient until the Beta 4 package is downloaded and prepared for update. Tap ‘Install Now’ when prompted.
6. Wait a couple of minutes. The iPhone will reboot right after the update process is completed!

If you plan to update from a public iOS 13 version, you have to enroll your device first:
1. Open Apple’s Beta Software Program website and sign in with your Apple ID credentials.
2. Tap on enroll your device and download the iOS 14 Configuration Profile.
3. Install the Profile on your iPhone or iPad and reboot your device.
Tip: You can find the details steps in our iOS 14 Public Beta install guide.
4. Open the Settings app and browse for General -> Software Update.
5. Tap the Download and Install button.
6. Provide your Passcode and Agree to Apple’s Terms. Be patient until the iOS 14 Public Beta 4 is downloaded, unpacked and installed on your device.

Have you installed iOS 14 Beta 4 on your iPhone? Share your thoughts in the comments section available below.

Related: Check out all the important new features coming in iOS 14 here. Many hidden features are also covered!