iOS 14 Beta 7 Release Notes, Changelog And How To Update Tutorial 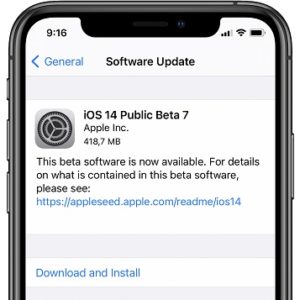 Apple has recently seeded iOS 14 Beta 7 for both Developers and Public Beta testers. This release comes one week after Beta 6 and more than 2 months since the iOS 14 testing program commenced.
We’re currently reaching the later stages of the iOS 14 fine tuning and near the public release, which is scheduled for this fall (September or October).

iOS 14 Beta 7 doesn’t bring too many noticeable changes because it focuses on bug fixes and performance improvements of the new features that have been already introduced in the previous test versions.
However, we could still identify some minor changes that include a new Dark Mode option for the stock rainbow wallpapers, as well as modified App Library categories.

As with all test versions, Apple’s release notes for this software update are only informing the user that they’re about to download a beta software.
For more, details you’re asked to visit: https://appleseed.apple.com/readme/ios14
Tip: You have to log-in with your Apple ID to be able to browse the link shared above.

The following is an open changelog with the visible differences that we could spot after updating from iOS 14 Beta 6 and Beta 7. In case we missed something out, feel free to comment this article and contribute to this list:
– Dark Mode Rainbow Wallpapers:
The stock iOS 14 rainbow stripe wallpapers have received a Dark Mode version. However, you can display the dark theme version, only if Dark Mode is enabled system-wide.
How To: To display a rainbow stripe wallpaper you have to browse for Settings -> Wallpaper -> Choose a New Wallpaper -> Stills. Scroll for the desired rainbow wallpaper color.

– New App Library Categories:
The App Library provides an one-page layout for all the apps available on your iPhone. The apps are grouped in default categories. Some of these have been changed in Beta 7. The two default ones: Suggestions and Recently Added are unchanged though.
Other categories now available are: Social, Utilities, Productivity & Finance (former Productivity), Information & Reading (was Reference & Reading), Creativity, Other, Health & Fitness, Shopping & Food, Entertainment, Travel (new addition), Games, Arcade (new), and Education.

Important: Before updating perform a full backup of your iPhone, just in case something goes wrong.
Update From Beta 6
If you’re already running iOS 14 beta on your iPhone, updating to Beta 7 works as with any other public software update.
You have to tap on Settings and scroll for General -> Software Update. Tap on Download and Install and follow the on-screen instructions.

Update From iOS 13
To update to iOS 14 Beta 7 from a public iOS 13 version, requires you to enroll your iPhone first and to download the iOS 14 Beta Profile from the Apple Beta Software Program website.
We’ve written a detailed step-by-step guide about how to install iOS 14 Public Beta. The guide exemplifies Beta 2, but all steps are identical for Beta 7 too.

We’ve also recorded a video that shows how to get iOS 14 Beta 7 on your iPhone. The video exemplifies an earlier Beta version, but steps are identical for all test releases:

Have you updated to iOS 14 Beta 7? Share your feedback with the help of the comments section available below.

Related: You might wanna also check 50 new features that are coming in iOS 14!