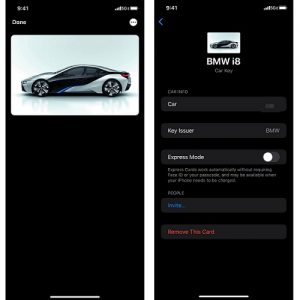 Recently, some screenshots have surfaced, on Twitter, showing an alleged iOS Car Key interface. It’s unclear if they’re faked or actual leaked captures of the upcoming new iOS 14 feature. Nevertheless, and in depth code analysis of the most recent iOS 13.4 release confirms that Apple is intending to provide digital car keys in collaboration with famous car manufacturers like BMW.
Update: The digital Car Key feature for iPhone goes live with the release of iOS 13.6! It’s compatible with most BMW models manufactured after July 1, 2020!

Car Key should come alongside CarPlay and will use NFC technology (already used by ApplePay to process credit card payments) to allow iPhone users to digital lock and unlock their cars, start the engine and many other similar cool things that will render the physical car keys obsolete. So, no matter if the nearby images are faked or actually leaked, they do help you have a general idea of how the new iOS CarKey interface will look and function. 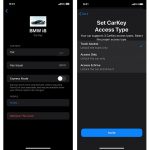 – CarKey Access Types: the leaks inform us about three level of access Trunk Access (Lock/unlock the trunk only), Access Only (Unlock/lock your car without being able to drive it) and Access & Drive (Unlock the car and start the egine)
– Express Mode: Will allow you to lock/unlock the car without authenticating with Face ID or Passcode.
– Invite: should allow you to share your digital key with others. This includes temporary or permanent access. Sharing the CarKey could be available through the Messages app, or even more straightforward using AirDrop.
Fact: CarKey will be also available to Apple Watch models equipped with NFC hardware!

Info: We could get the first official glimpse regarding the new iOS CarKey feature at the start of the summer, when iOS 14 will be introduced to beta testers, during the WWDC 2020 keynote!

In the meantime let us know what you think about this new feature? Use the comments section available below!