iOS 14 Public Beta 5 Features And How To Install Guide 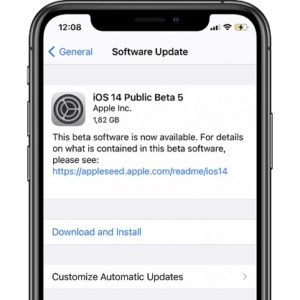 Apple has just released the iOS 14 Public Beta 5, one day after the same version became available to registered Developers.
This is the 5th iteration of the iOS 14 beta testing program, that started on June 22 and is ongoing until the general release that’s scheduled for this fall.

Beta updates don’t come with a detailed update log. Here are the changes that we found after testing out this latest beta:
Widget Privacy – Widgets belonging to apps that require location access, are also requiring your permission. The option is called ‘While Using The App or Widgets’. When selected, it allows widgets to use your location data for up to 15 minutes.
Widget Screen Time – in iOS 14 Beta 5 ‌widgets‌ are blocked for Screen Time, if the app in question is blocked.
Apple News Widget – has got an even taller and larger widget frame. It’s now able to display additional news stories. However, because its oversized it won’t fit on the Home Screen. You can only view in in the Today View.
Exposure Notifications – in iOS 14 Beta 5 you have the option to choose a country, region or state and find out if an Exposure Notificaiton app is available in your location. This is available when you tap on ‘Turn on Exposure Notifications’.
Hidden Photo Albums – a new ‘Hidden Album’ toggle, when enabled, allows the Hidden album to disappear from the Albums list. However, the Hidden Album remains always available in the image picker.

How To Update To iOS 14 Public Beta 5

If you’re updating from a previous iOS 14 beta version, things are simple and straightforward:
1. Open Settings on your iPhone or iPad.
2. Browse for General -> Software Update.
3. Tap Download and Install, on the iOS 14 Beta 5 software update screen.
4. Input your Passcode and Agree with Apple’s terms.
5. iOS 14 Beta 5 is downloaded, prepared and installed on your device.
Fact: The iPhone will automatically reboot to mark the end of the update process.

If you plan to install this beta on an iPhone that’s currently running an iOS 13 version, you first need to be fully aware that a test version isn’t as reliable and efficient as a public release perform. We’ve outlined 5 reasons why you shouldn’t update to iOS 14 Beta on your own device.
Secondly, make sure that you have a full iPhone backup, just in case something goes wrong.

You have to signup your iOS device for the beta program:
1. Open Apple’s Beta Software Program website and sign in or sign up with your Apple ID account.
2. Select ‘enroll your device’ and download the iOS 14 Configuration Profile.
3. Install the Profile and restart your device.
Tip: You can find the details steps in our detailed iOS 14 Public Beta install guide.

4. Open Settings and browse for General -> Software Update.
5. Tap on Download and Install.
6. Type your Passcode and Agree to Apple’s Terms. iOS 14 Public Beta 5 will be downloaded, prepared and installed on your device.

For even more help check out our video tutorial. It’s recorded for Beta 4, but the steps are identical for Beta 5 too.

Have you managed to install iOS 14 Beta 5 on your iPhone or iPad? What’s your feedback. Have you found any new features not mentioned in this article? Let us know with the help of the comments section available below.