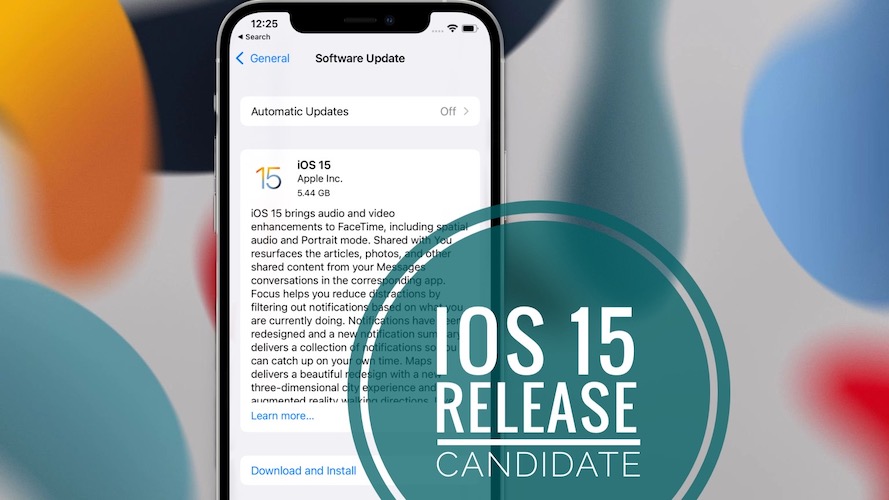 Apple has rolled out the iOS 15 Release Candidate software update with build number 19A344. If no major bugs flare up, this could be identical with the iOS 15 release date announced for September 20. It’s the 9th iOS 15 beta release and comes two weeks after Beta 8!

Update: iOS 15 has been released to the general public! Download it now!

The Release Candidate update is available over-the-air in Settings -> General -> Software Update for both Developers and Public Beta testers!

To be able to get the 5.44 GB large iOS 15 RC on the Software Update screen you need the iOS and iPad 15 Beta Profile installed on your iPhone or iPad.

Tip: For a detailed step-by-step guide on how to update to iOS 15 Release Candidate version tap here.

If you’re new to beta testing you’re probably wondering how to switch from the iOS 15 beta updates to the public release version.

If you remove the profile after updating to the iOS 15 RC, you won’t get any other iOS 15 software update on September 20, unless Apple decides to change the build number. This means that you will switch to an iOS 15 public release when iOS 15.0.1 or iOS 15.1 will be released!

iOS 15 brings lots of new features to the iPhone. However, we haven’t been able to spot significant changes introduced in the RC version when compared to Beta 8.

One of them has been spotted in iPadOS 15. Apps can to continue to use the device’s camera while displaying multiple windows and being the only app on the screen.

If you found others don’t hesitate to share them with us in the comments section!

On top of this it also highlights changes in Notes, Reminders, Apple Music, Translation, Home Screen widgets, Apple ID, Find My and others!

We’re currently resting out the iOS 15 RC version. Any bugs will be listed in this section. If you stumble upon a problem, don’t hesitate to share it with us using the comments section!

Have you updated iPhone to iOS 15 Release Candidate version? What’s your feedback? Use the comments section available below and let us know!

Related: Apple has also seeded the watchOS 8 RC, as well as the tvOS 15 Release Candidate versions.