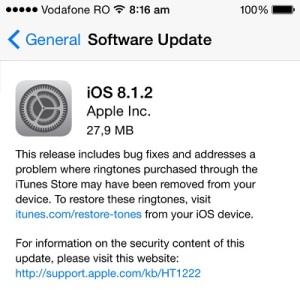 Less than a month since it’s previous 8.1.1 rollout, Apple has released the next update for it’s famous mobile device operating system. iOS 8.1.2 comes to the rescue of several iPhone, iPad and iPod touch users that have bought ringtones from iTunes and their purchases aren’t showing up anymore.

I would dare to ask, who buys ringtones anymore? Nowadays it’s so easy to create them yourself on a computer or notebook and upload them to your iPhone. You can even download tunes for free!

The Cupertino based company also claims a series of bug fixes, without providing any specific example. The security content update is now also included, after a certain delay. You can notice from the size of the package (27.9 MB) that the release doesnn’t come with anything major. However, those with missing iTunes ringtones will surly welcome it and that’s rightfully so.

How To Restore Missing iTunes Tones 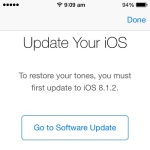 This update is downloaded and installed as all the others. Tap on Settings, hit General, go for Sofware Update and tap on Download and Install to start the process. Provide Passcode, agree with terms and let your iPhone do the work. Ten minutes later everything should be in place. Next, you can proceed and used the web-based tool created by Apple and recover iTunes ringtones, if you have some unaccounted.

Future iOS Update Needs
It seems that we do need to wait for another release to get fixes for minor but annoying problems like the “freeze” which occurs, when scrolling your iPhone and a text (message) lands. Or a similar issue caused when two messages land back-to-back. Only the first one is previewed with a banner, although sounds are played for both texts. These minor glitches happen even on our iPhone 6-es, so they’re clearly not caused by a hardware constrain, but the issue is rather software-based.

Problems with WiFi connections are also persisting and an ongoing discussion thread is unfolding on Apple’s discussion forums. If you have a problem with your iPhone and iOS 8 we encourage you to inform the Cupertino based company about it. The more complaints on a specific issue they receive, the better it gets prioritized and a fix will be included sooner in an upcoming iOS release. This is why we encourage you to send your feedback to Apple: https://www.apple.com/feedback/iphone.html.