Apple has recently released an new update for its latest iOS version. The 8.1.3 upgrade promises to fix various bugs, increase the stability of Apple’s mobile operating system and brings performance improvements.
Although all these claims are backed-up by yesterday’s release, the Cupertino manufacturer disappoints the users of older iPhone terminals again. Numerous old iPhone users still encounter trouble with Bluetooth connectivity, WiFi stability and Calendar bugs, after upgrading to iOS 8 more than four months ago!
It seems that the record sales of the iPhone 6 and 6 Plus flagships, as well as the successful launch of Apple Pay lead to the neglection of users owning older iPhone models, who still can’t get some important bug fixes, even after updating to iOS 8.1.3. 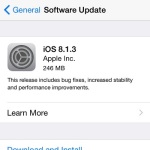 The release is still fresh so you probably weren’t, automatically notified by your device, yet. To update now please tap on Settings, go for General, enter Software Update. Your iPhone or iPad will check for new updates and will prompt you with the 8.1.3 version. Hit Download and Install and introduce your Passcode when prompted. Agree with Terms and Conditions and your device will start downloading the update. This takes between 5 – 7 minutes (246 MB) on a regular WiFi connection. Once your update is downloaded, allow your phone to install it. A reboot will signal the end of a successful upgrade progress! 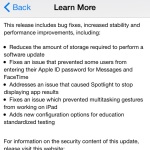 Here are all the details about the content of the latest iOS upgrade:
– Storage Efficiency: According to Apple your iPhone will need less free storage available while performing an update!
– Spotlight Fix: resolves a problem that sometimes caused the Spotlight feature to exclude app results from its searches.
– iPad Multitasking: should now work flawless after a bug, that prevented multitasking gestures from working, has now been removed.
– Messages & Facetme: Apple ID password input should now work flawlessly.
– Education: iOS 8.1.3 comes with new configuration options for standardized testing