iOS 8.1 All Updates and Fixes 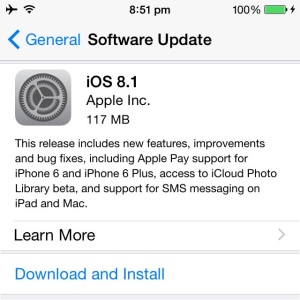 Apple has just released iOS 8.1, the first significant update to the most advanced operating system that ever ran on iPhones, iPads and iPods. It brings highly expected new features like Apple Pay, available only for NFC supporting devices like iPhone 6 and iPhone 6 Plus. For now, the Cupertino based company inform that Apple Pay is implemented only in the US and available in 220,000 stores and counting.

Another great addition provides the option to manually select between 2G, 3G and LTE when it comes to cellular network connections. This means that you can efficiently save battery when needed by switching to the less straining 2G connectivity. Please be advised that this feature isn’t available in all countries.

Also worth extra mentioning is the return of Camera Roll in the Photos app. This menu which includes all photos and videos, recorded and saved on your iOS Device had disappeared when iOS 8 was first announced. It caused the majority of iPhone fans to ask Apple to reintroduce it, because an iPhone user could no longer see all his photos and videos in one folder.

iPhone users with lower storage will welcome the improvement which lets the Photo app alert you, that space is about to end for you, before recording a Time Lapse video.

The Message app also has a new addition allowing iPhone users to send and receive SMS and MMS messages via their iPad and Mac. A bug that prevented Message searches to show results has also been handled along with a minor error that prevented read messages to be marked as ‘read’.

Important fixes which come with iOS 8.1 include:
– elimination of a bug that prevented screen rotation to stop working from time to time.
– Bluetooth connection errors with hands-free devices are no longer a problem
– resolves the rare WiFi performance issues
– solves the problem with not playing Safari videos
The complete list with all iOS 8.1 new features, improvements and error fixes is available by accessing the nearby image, or by watching the video tutorial available below.

iOS 8.1 Update Tutorial
Watch the following video that shows how to update to iOS 8.1. It was recorded using an iPhone 5S running iOS 8.0.2. Total update duration which includes WiFi download and Installation takes between 25 – 30 minutes. The upgrade size is 117 MB.