After unveiling their first ever wearable device, the Watch, Apple have also rolled out iOS 8.2 the latest version of their famous mobile operating system.
Obviously the most noticeable feature introduced with this update is the Apple Watch app which is used to pair your iPhone with the upcoming wrist-gadget.
Until then you can use the application to learn more about the Watch.
Follow videos or visit the App Store, built specially for Apple Watch!
Besides introducing the Watch’s companion app, iOS 8.2 comes with improvements for the Health App, improved stability for various other apps and a series of bug fixes!
The next version updated by Apple is iOS 8.3 and is detailed here. 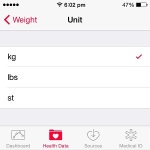 Because of the Apple Watch release the Health App needs an upgrade to be able to handle massive data gathered by the iPhone’s new partner. iOS 8.2 comes within improved stability when dealing with large data amounts. It also provides options to select units of measurement for health essentials like: weight, temperature, height, distance or blood glucose. The ability to add and visualize workout sessions from 3rd-party apps has been introduced so that you can check all data synced from the Watch!
A privacy setting that turns of step, stairs and distance tracking has also been updated for those that wish to keep these stats private. Other fixes like those for units of vitamins and minerals; graphs without data values; and Medical ID picture have also been provided. 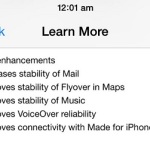 This update adds a series of stability improvements which include Mail, Flyover in Maps, Music, VoiceOver reliability, Hearing Aids connectivity.
In the nearby image you can also find the complete list of bug fixes included in this update!
If you consider all the above described improvements important, and you should,proceed with upgrading your mobile Apple device to iOS 8.2 Go to Settings -> General-> Software Update! Tap on Download and Install. Your device will download the 443 MB update (iPhone 5S from iOS 8.1.3) and continue with the install when the download completes!